NOTE: THIS IS THE FINAL NEW BLOG POST AT THIS LOCATION. SUBSEQUENT BLOG POSTS WILL BE FOUND ON MY NEWLY REVAMPED WEBSITE AT ALEXBLEDSOE.COM.

I love action heroines. I've even put one in my next Eddie LaCrosse novel, Wake of the Bloody Angel. But my standards require, if not strict adherence, at least lip service to the laws of the natural world. That negates the whole concept of the the "ass-kicking sprite," wherein a tiny female character suddenly has the ability to overpower people (usually men) three times her size. No, my idea of an action heroine is someone like Xena, who has the physical size and strength to really do battle. And of course, the gold standard is Ellen Ripley in Aliens. She has no super, or supernatural, powers; she's merely tough, resourceful, determined and smart.

Which brings me to the great forgotten action heroine: Meg Coburn. Feel free to insert your own variation of, "Who?" 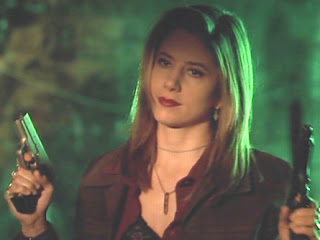 Meg Coburn, played by Mira Sorvino, was the heroine of Antoine Fuqua's 1998 film The Replacement Killers. Notable as the American film debut for Hong Kong star Chow Yun-Fat, it's a fairly simple story of hired killer John Lee (Chow), who decides he has a conscience after all. Meg Coburn is a forger he hires to make a new passport so he can return to China and protect his family. Unfortunately the bad guys intervene, putting Lee and Meg on the run together.

Two moments cement her appeal for me. One is visual: during the shootout in her first scene, she and Chow Yun-Fat arrive in the same room and drop into the same pose, only aiming in opposite directions. The image says it all: it's the mutual competence of equals. And in an action movie, if you're as competent as Chow Yun-Fat, you're doing all right. 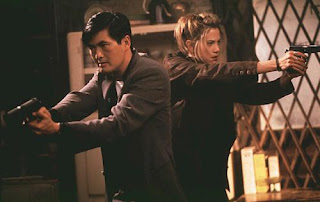 The second occurs later, when John forces Meg at gunpoint to accompany him. She gives him a look that could freeze magma and says calmly, "Okay, if that's the way you want to play it. But when the gun is in my hand, we're going to have this conversation again."

There's a ton of other things that make Meg cool, but in some ways the things she doesn't do are more interesting. She never panics. She may yell, but she never once screams. She never stops trying to resolve the immediate situation. Yes, she's feminine and sexy, but it's incidental; there's only one fleeting shot I'd describe as actual Michael Bay-style pandering.

If you decide to see the film, seek out the "extended cut" DVD. Since it was made in 1998, when Hong Kong was about to revert to Chinese control, a crucial subplot was minimized in the theatrical release to avoid offending China and losing Chow Yun-Fat's hometown market. It's been restored here, and it fleshes out the motivations in a pretty substantial way. 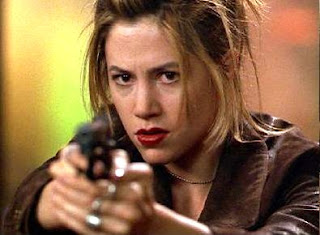 It's obvious that we, the public, want different things from our heroines than from our heroes. It's why Supergirl dresses like a cheerleader, after all. But occasionally, amongst the pantings and leerings of the Bays and Favreaus, a real person slips through. Mira Sorvino's Meg Coburn was one of those. It's a shame more people didn't notice.