Patrick Rothfuss, author of The Name of the Wind, is doing a fundraiser for the Heifer Project, an effort to provide people in third-world countries with both livestock and the training to care for them as a renewable resource. Lots of authors have contributed various things for auction, including me: 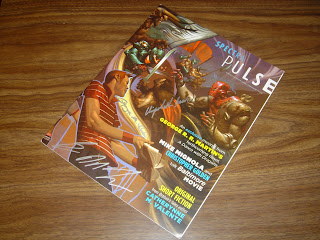 I donated this premiere issue of Spectra Pulse magazine signed by authors George R.R. Martin, Jeff VanderMeer, Elizabeth Bear, and Catherynne M. Valente. As a bonus, it includes an except from George R.R. Martin's A Dance with Dragons, the next book of the Song of Ice and Fire series.

Visit Pat's blog for more information on the many cool things up for auction and to help out this eminently worthy cause.

Posted by Alex Bledsoe at 9:18 AM No comments:

This past weekend I took the Mater Familias and the C-in-C back to Tennessee to visit his grandmother, and a bunch of my old friends. We tried a visit when the baby was six weeks old, but in the time (10 hours) it took us to drive there, Mom got sick with something contagious, so we essentially had time to run in, take one picture and then head back.

This time we flew, landing in the home of rock and roll, barbeque and hotel ducks: 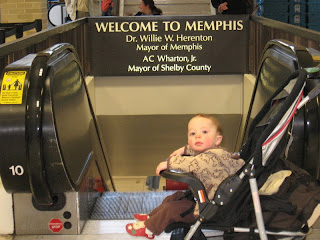 A short drive through one of the most boring parts of the country (western Tennessee) landed us at my home town, Gibson, where this time Charlie got to spend a whole lot more time with his grandmother, who was suitably tickled. 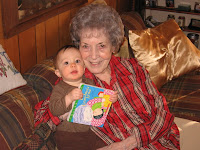 On Saturday we journeyed to far more scenic middle Tennessee for a terrific lunch with a bunch of friends I haven't seen in six years. It was great to visit with everyone, and really touching to know they'd all made time for me. 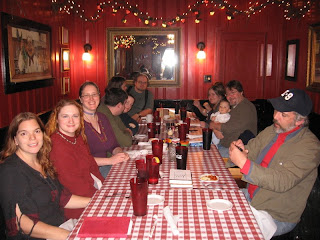 There was one other reunion that weekend, one I never really expected to happen. Watch for an account of that, with photos, in an upcoming entry.

Thanks again to my family and friends for making this weekend so special.
Posted by Alex Bledsoe at 8:48 AM 4 comments:

Ark-ing up the wrong tree? 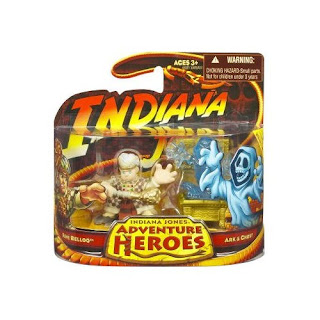 I saw this at Kohl's tonight. It's a figure of Rene Belloq, suave villain of Raiders of the Lost Ark, packaged with a tiny replica of the Ark of the Covenant itself. And what sits atop the Ark? A blue plastic spectre, like the ones that emerge at the end of the film.

The Ark contains the remains of the actual Ten Commandments, and opening it invokes the wrath of God.

It's a Holy Ghost action figure.

Perfect to go on the shelf next to this: 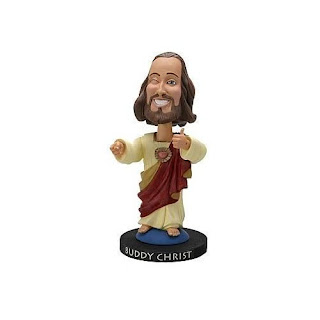 As the author of a novel called The Sword-Edged Blonde, about a character derisively called a "sword jockey," I've spent some time thinking about, reading about and watching lots of swordplay. For such an outdated mode of fighting, it permeates our popular culture. From Star Wars to Highlander, from Crouching Tiger, Hidden Dragon to Kill Bill, we love to see people square off with sharp metal in their hands. Below, I've listed five I consider the best.

First up is my favorite swordfight, from Richard Lester's 1973 all-star version of The Three Musketeers. Actually, I love all the fights in this movie and its sequel The Four Musketeers, because they don't seem choreographed or staged: there's a clumsy violence that's exactly right for tough men fighting for their lives, using both swords and anything else handy.

The swordplay in this scene from The Princess Bride tells us as much about the characters as any stretch of dialogue. The viewer likes both combatants and wants neither to lose, even though it's clear one of them must. The fight itself mixes dazzling choreography with the wit of screenwriter William Goldman and the actors' perfect deadpan delivery. If only something could be done about that cheesy synthesizer score....

In Knights of the Round Table, noble Sir Lancelot (Robert Taylor) seeks to join King Arthur's (Mel Ferrer) cause. But when they finally cross paths, neither knows or recognizes the other. So after jointly defeating a band of outlaw knights, they battle each other for hours, to a draw. Only then do their true identities come out.

(Alas, I could find no clip of this.)

At the climax of Akira Kurosawa's Sanjuro, the nameless samurai (yes, the original version of Clint Eastwood's Man with No Name) faces off against Hanbei Muroto, his opposite number and a man he's come to like and respect. Their final confrontation probably contains the least number of blows of any classic swordfight, but you can practically see the fight in their eyes as they stare each other down before an ending so outlandishly over-the-top it's still a shocker.

And finally, the classic. This is probably the best swordfight in movie history, because of its narrative purpose in resolving the story, its presence in a definitive motion picture version of a universally-known tale, the glorious Korngold score accompanying it, the skill of the actors in pulling it off (Basil Rathbone was, in fact, a champion fencer), and the simple fact that no one, ever, will be as cool as Errol Flynn in The Adventures of Robin Hood:

Any suggestions for scenes I may have missed?
Posted by Alex Bledsoe at 12:01 AM 5 comments:

New review of The Sword-Edged Blonde

Tia over at Fantasy Debut gives The Sword-Edged Blonde a perceptive evaluation. In part she says:

"Eddie runs into his old friend, whose wife is in considerable trouble. The reunion scene between the two friends was great, and reminded me why I enjoy reading novels by authors who have at least reached the age 35 or so. No way a twentysomething author would have thought of that."
Posted by Alex Bledsoe at 7:39 AM 2 comments:

One of the strengths of the vampire concept is that it can symbolically represent almost anything else. It's been used to represent disease, nihilistic freedom and even the dignity of past eras. In Stoker's Dracula it stood for unbridled sexuality, which the stolid Victorian heroes eventually re-bridled. But Glenn Standring's 2006 film Perfect Creature may set some sort of record for audaciousness: it uses vampires to comment on the Catholic Church's abuse scandal.

In the alternate, vaguely steam-punkish world of the film, vampires are in fact another species of human, born at random to human mothers (the newborn babies with tiny fangs are one of the coolest/most disturbing visuals).

These exclusively male blooddrinkers are dedicated to benevolence and play the same societal role as the Church: they become black-clad "brothers," there are special vampiric rosaries, and the church rituals include a literal blood sharing that requires no supernatural transubstantiation. The main vampire character Silas is played by Dougray Scott in a carefully controlled performance that stresses his status as an outsider: he repeatedly observes human beings with a cock of the head and a slightly perplexed squint, and never raises his voice.

In this other reality, the science of genetics has been outlawed, but the Church practices it in secret in an attempt to increase the number of brothers born. One of these experiments goes awry, creating a form of insanity that turns Edgar (Leo Gregory) into a traditional neck-biting, leave-'em-dead vampiric killer. The Church, with the complicity of the police, attempts to contain Edgar, the disease he carries and any potential scandal. As in the real life Catholic attempt to silence the victims of pedophile priests, it doesn't quite work out.

The film rips along (it's a brisk 88 minutes), but never feels rushed or truncated. My only real complaint is that the final confrontation between Silas and Edward is choreographed like any other modern fight scene: characters who are never shown training or even engaged in physical conflicts suddenly become leaping, flying martial-arts masters. A super-powered vampire version of this fight would have been more appropriate, and certainly more entertaining.

Still, that's a minor caveat in the face of so much originality. Twentieth-Century Fox dumped this New Zealand film on the DVD market with a terrible generic cover and no publicity, but it's well worth seeking out (I found a used copy for $4.99). It stands as more proof that the vampire can be basically anything we want it to be.