One massive fringe benefit of teaching at the Wisconsin Writers Institute this past weekend was that I finally got to meet my agent Marlene Stringer in person. That's right: although she's been my agent for five years and listened patiently while I whined, kvetched, bitched and wheedled, we've never actually met. Now we have, and here's the photo to prove it: 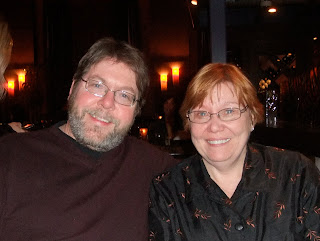 Just back from Odyssey Con 2010 in Madison, WI.

High points:
--meeting guest of honor Harry Turtledove for the first time.
--hanging out with other guest of honor Tobias Buckell who I haven't seen in over a year.
--dinner with Toby, Steven Silver, Sarah Monette and Lynne and Michael Thomas.
--premiering the first chapter of The Girls with Games of Blood.
--participating in a great panel on the resurgence of sword and sorcery.
--and an end-of-con Thai outing with Toby, Sarah, Nayad Monroe, LaShawn Wanak and Karen Babich.

Low point:
Discovering that none of the dealers had any of my books for sale. They also stocked none of Toby Buckell's original work, only his "Halo" tie-in, and he was a friggin' Guest of Honor. Seriously not cool.

I did a pretty poor job of photographically documenting the convention, but I managed to get a few shots. 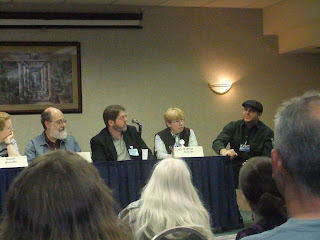 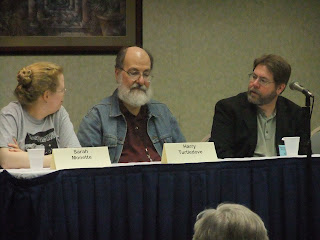 Sarah and I wait for Harry to be brilliant. We didn't wait long. 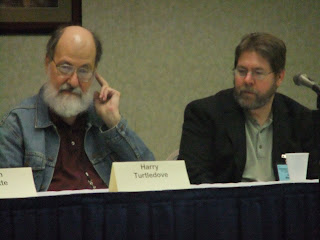 Harry ponders one of my bon mots. I appear to regret it. 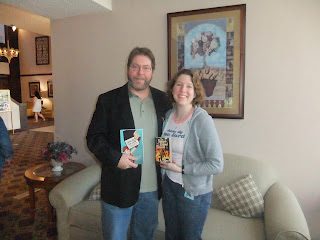 Me with Lynne Thomas, co-editor and contributor to the Dr. Who essay collection, Chicks Dig Time Lords. 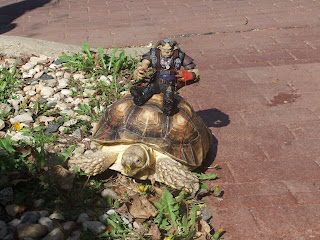 Posted by Alex Bledsoe at 1:33 AM No comments:

Since the death of Robert B. Parker in January 2010, I've been re-reading his Spenser novels. The earliest ones, written in the 1970s and 80s, staked out his moral as well as physical territory, revolving around ideas of traditional masculinity in conflict with the modern world. And in 1981's Early Autumn, Spenser demonstrates how his code is built and applied in the life of a clueless teenage boy. It's a book of its time in the particulars of setting, plot and society, but it touches on universal ideas that may be more applicable than ever.

Paul Giacomin is a chess piece between his divorced parents. Private eye Spenser is hired by his mother to retrieve him from his father, but it's not from maternal affection, merely the latest skirmish in their ongoing, selfish power struggle. The fifteen-year-old has literally, as they say in the South, had no raising:

To protect Paul, Spenser hides him in an isolated cabin. Over the course of several weeks he teaches Paul carpentry, weight lifting, boxing and most crucially, self-reliance:

"...that's why, kid, before you go back, you are going to have to get autonomous."

"Autonomous. Dependent on yourself. Not influenced unduly by things outside yourself. You're not old enough. It's too early to ask a kid like you to be autonomous. But you got no choice. Your parents are no help to you. If anything, they hurt. You can't depend on them. They got you to where you are. They won't get better. You have to."
(p. 123 of the Dell paperback reissue).

The extended middle section demonstrates just how Paul gets autonomous. In a lot of ways it's idyllic: Paul, who would be called a slacker if Parker was writing now, responds to Spenser's tough love and blooms (or whatever the male equivalent is) under it. The construction of the cabin, which prefigured Life as a House by two decades, becomes a metaphor for the construction of Paul's self-esteem. And in one of the book's more clever twists, Paul's nascent autonomy leads him to his dream career: ballet. Which does not involve coming out as gay, which there's no indication he is. And which Spenser, the most "he" of he-men, fully supports.

The book's weakness is the same as the recent "Young Spenser" novel Chasing the Bear, which I reviewed here: there's no real challenge to Spenser's ability to do what he says he'll do. He knows how to handle every difficulty he encounters, which is both a bit of a cheat dramatically, and also part of the thematic point. It would be hard to demonstrate self-reliance if the circumstances didn't allow it, and without that demonstration, Early Autumn would be merely The Celestine Prophecy for wayward youth.

And Paul puts up little resistance. He's apathetic and aimless, but not really rebellious. In re-reading the book, I was struck by two contradictory thoughts. First was how much Paul seemed to resemble the kids I see in the mall, limp-bodied and pale, unengaged in the world except through a screen. Apparently, if Parker was writing about them in 1981, they've been around a while. Second was the desire to see Spenser confront a real rebel, someone determined not to be "saved." Yet that story would've been a cliche'.

As proof of Spenser's success, Paul Giacomin becomes a recurring minor character in the later novels, especially Pastime, where we first learn about Spenser's own childhood. But Early Autumn remains a unique book in the series, and not just for the elaborate carpentry skills Spenser never again displays. It's the first and only time this poster boy for autonomy steps deliberately into the role of parent. He's good at it, of course; then again, he has the luxury of choosing his child, something real parents can't do.

Or real children, for that matter. As someone who was essentially abandoned by the elder male figures in my childhood, I wonder how I would've responded to such a strong masculine presence dedicated to my self-improvement. Truthfully, I think I would've resisted far harder than Paul Giacomin. And I wonder what contemporary teen boys, in a world of pedophile priests and other sexual predators, would make of a grown man who takes a boy alone into the woods for weeks at a time. Would Spenser even think of such an idea today?
Posted by Alex Bledsoe at 1:59 AM 3 comments:

"The most demanding form after poetry..."*

(*the short story, according to William Faulkner.)

For the first time in a long while, I'm working on a new short story.

When I had my epiphany moment in 1996 and decided it was time to get real about this whole writing thing, I started with short stories. For a while I wrote a new one every week, as if the stories had piled up in my brain over the years and then burst forth in a rush when I finally took them seriously. They averaged 3,000 words, which still seems to me about right for a short story. They ranged over a whole list of topics, some genre and some literary. They helped me create recurring characters and taught me about pacing and editing (in a short story, you have to be ruthless: if something doesn't advance the plot, character or atmosphere, it has to go). And the very first short story I wrote, "The Chill in the Air Wakes the Ghosts Off the Ground," was also the very first one I sold, to a long-gone 'zine called Gaslight: Tales of the Unsane.

(I'll send a signed copy of your choice of my books to the first person to peg the band and song that inspired that story's title.)

The short stories tapered off once I started writing novels. The creative challenges are similar at first glance, much the same way tennis and raquetball look similar. But each game uses completely different muscles and reflexes, and I've found that to be true for novels and short stories. For example, characters in a novel can be established with more subtlety and detail; a short story's characters have to be pretty quickly sketched, which is why so many seem to be archetypes.

That said, when I do sit down to write a short story, it still tends to come quickly; I can produce a finished 3,000-word draft in about a week. This one is no exception: the first draft is 3,100 words according to the software counter. The final draft may be a bit longer or shorter, but probably by no more than 500 words either way. And since the deadline is April 15th, I have revision time, which believe me, I always need.

What's this one about? Ghost hunting. Beyond that, I can't really say. But I'll definitely let you know when and if it's available.

So how does my process compare to yours?

“I asked Ring Lardner the other day how he writes his short stories, and he said he wrote a few widely separated words or phrases on a piece of paper and then went back and filled in the spaces.” --Harold Ross
Posted by Alex Bledsoe at 1:25 AM 2 comments: