Finding A Bomb Built in Hell

I've just finished reading the bookends of one of my favorite series, the "Burke" novels by Andrew Vachss. After 18 books in 23 years, he completed it with the release of Another Life in 2008. Meanwhile, his website has the free PDF of his first, unpublished novel, a sort of prelude to the Burke series titled, A Bomb Built in Hell.

To call Bomb "disturbing" is an understatement. Written in 1973, it deals with Wesley, a supporting character in the Burke series, one who's so scary even mentioning his name terrifies people. He's an amoral hit man who finally decides to start killing the people he feels most deserve it. But his judgment, needless to say, is a bit twisted.

What skews it, as in all Vachss' novels, is his tormented childhood at the hands of the government. Abandoned at age four, he's raised by the state and becomes a petty teen criminal. In the first few pages he refers to reform institutions as "upstate sodomy schools," and thinks no more of going to jail than a normal person would going to Wal-Mart. He's desensitized, an empty vessel waiting to be filled.

His prison mentor Carmine does just that, teaching him the prison ropes and preparing him for life outside as a hit man. When Wesley is released, he sets about avenging Carmine on the mobsters who let him rot in prison. But when that's accomplished, he decides to seek a more personal revenge, not against individuals but against an entire class of people. I won't give it away here, but what Vachss wrote about in 1973 came to pass in an almost identical event in 1999.

There are a lot of parallels with the later Burke series, the first of which (Flood) did not appear in print for another thirteen years. Where Wesley has Carmine, Burke has the Prof; Wesley's driver and mechanic "Pet" Petraglia parallels with The Mole, Burke's mechanical and electronic expert. Wesley even has a dog who guards his home, just as Burke has Pansy the mastiff.

In the author's notes on his website, Vachss says publishers repeatedly told him, "the book was also 'too' hard-boiled, 'too' extreme, 'too' spare and violent. I heard endlessly about how an anti-hero was acceptable, but Wesley was just 'too' much."

And maybe, dare I say it, they were right about that last bit. Burke narrates his own stories; while the other characters see only his carefully-chosen front, we are privy to his thoughts, feelings and motives. Bomb is written in third person, so that the reader sees Wesley the same way the other characters do. There's very little sympathy for him, ultimately, especially as he closes in on his greatest hit at the climax. In fact, if Bomb were written and published today, the outcry would probably be massive; Vachss might even disappear at the hands of Homeland Security for advocating (and describing in detail how to accomplish) such extreme acts.

But despite being a period piece in a sense, "Bomb" still resonates with the thing that makes all Vachss' books so powerful: the sense that there's reality in the details, no matter how outlandish the characters or plot might seem. Vachss' has spent his life in the trenches, and if he says this is how something should be done, I wouldn't doubt him.

Andrew Vachss is on the short list of heroes I never want to actually meet, along with people like Bruce Springsteen. If I caught any of them on a bad day, and they were rude or cross with me, then I would lose great swaths of my life tied inexorably to their work. I need Vachss to stay on his pedestal, with his eyepatch and dog, glaring from his one eye. Part of it is because I suspect he'd have nothing but contempt for someone like me, who's never really been exposed to the brutality of life and whose ideas of good and evil would likely strike him as impossibly naive; I'm also pretty sure he could kill me with only his thumbs. 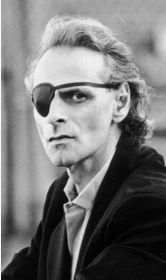 But do I love his work. The thing that draws me to it is, in fact, the same thing that attracts me to David Lynch's films. Lynch mixes the cruelest, most sadistic brutality with the tenderest, almost unbearably sweet love stories. I suspect that Lynch goes to the former extreme so that he can indulge the latter with a clear artistic conscience. I don't know if Vachss' motives are similar, but the effect is identical. The time spent touring humanity's cesspools is redeemed by moments like the frank but touching love scenes in Blue Belle.

As a novelist, I write stories and try to imbue them with elements of real life. Vachss, it seems, takes real life and uses it to tell stories. I don't believe one is neccesarily any better than the other, but the weight of real life is hard to argue with. And when that real life is as grim, gritty and traumatic as A Bomb Built in Hell, it's also hard to ignore.

Jeff Cunningham interviews me at his blog, and there's a perceptive review of The Sword-Edged Blonde over at Perrynomasia. Check 'em out!
Posted by Alex Bledsoe at 6:08 PM 1 comment:

Today I'm interviewed by Zombie Joe at Geek Like Me. This was an old-fashioned sit-down-face-to-face interview, with interaction and everything. He's also giving away signed copies of The Sword-Edged Blonde.
Posted by Alex Bledsoe at 6:30 AM 2 comments: 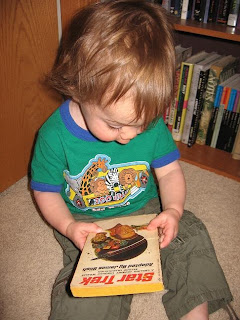 Today I'm blogging about James Blish and his paperback adaptations of the original Star Trek episodes over at Planet Stories. As you can see, they've reached heirloom, multi-generational status here.
Posted by Alex Bledsoe at 11:45 AM No comments:

This month at Guys Lit Wire, I review In the Heart of the Sea, Nathaniel Philbrick's book about the Essex, sunk by a sperm whale in 1820. Sound familiar? Herman Melville read about it, too.
Posted by Alex Bledsoe at 7:26 AM 2 comments: