What lies (er, hops) at the heart of The Maze?

One of the best thing about holidays? Catching up on movies! Over the next few days I'll be writing about some of the more interesting flicks I saw over the long weekend, starting with 1953's The Maze. 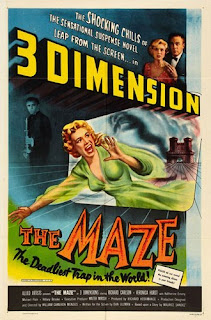 I remember watching The Maze at my uncle's house in Columbia, TN when I was a kid. I was too young for post-modern irony, so I took it at face value, and two things stayed with me: the nature of the monster at the end, and the "rational" explanation given for it.

Recently a friend found me a copy (it's never been "officially" released), and I was pleasantly surprised. The Maze is a low-budget little gem, full of surprisingly good things that balance out the...well, the undeniably goofy premise.

Kitty (Veronica Hurst) is engaged to Gerald (Richard Carlson), who is suddenly called back to his ancestral Scottish estate. Soon he breaks his engagement, but Kitty doesn't go down without a fight. With her spunky Aunt Edith in tow, she crashes Castle Craven and demands answers, especially when Gerald seems to have aged 20 years in a few weeks. When she doesn't get them, she sets out to find them on her own. What she turns up is...unexpected. WARNING: spoilers to follow. 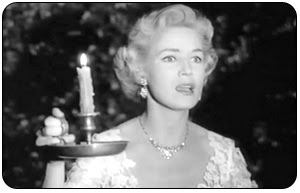 Carlson, a veteran of It Came from Outer Space and Creature from the Black Lagoon, is adequately emo as the tortured Gerald, but Hurst is a surprisingly tough-minded and resourceful heroine. She never falters in her determination to help Gerald, even when he insists he doesn't need it. She isn't one of those easily frightened scream queens, so when she does finally shriek, it's for a good reason. She's a welcome relief from the distressed damsels of so many similar films.

The film was originally made in 3D, and the depth of composition is interesting even in a flat image. The weird framing device (Aunt Edith narrating as essentially a disembodied head at the bottom of the frame) might have made more sense in 3D. And the use of the titular maze is creepily effective, on a low-budget par with what Kubrick did in The Shining.

But nothing compares to the nature of the monster, or the villain, or whatever one would call Sir Roger, the Baronet McTeam. He is, in fact, a 200 year old, sentient, man-sized bullfrog. 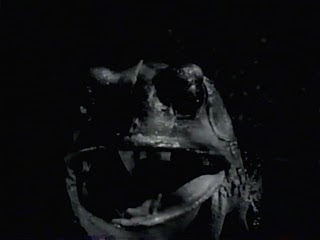 The film handles this in the only way possible, by keeping Sir Roger out of sight for most of the story, and almost gets away with quick glimpses during the climax. It's only the long shots, where the whole unfortunate costume is seen, and his rather silly demise that break out the giggles.

And much like the postscript of Psycho, we get a scientific explanation for what we've just seen. Seems that there was once an accepted theory called "phylogeny," which said that the human embryo goes through all the stages of evolution from invertebrate to mammal. Sir Roger, unfortunately, didn't develop past amphibian.

Sure, it's goofy. It was probably goofy in 1953. But it's also delightfully creepy, if you can put aside your post-modern irony.

Thanks to Bobbie at Junkyard Films for sending me this jewel.

A few pictures from World Fantasy. I was too busy to take very many, unfortunately. 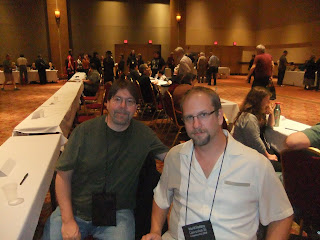 Me and my tablemate Travis Heerman, author of Heart of the Ronin, at the mass signing Saturday night. 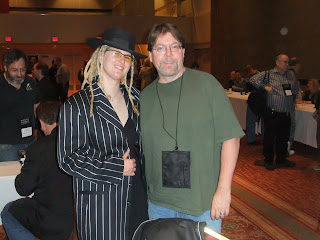 Me and Amelia Beamer, author of The Loving Dead (which I reviewed here). Amelia also interviewed me for Locus magazine. 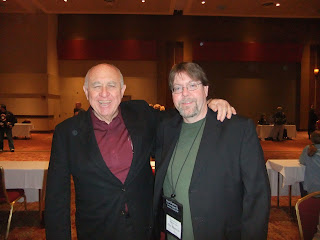 Me with Tom Doherty, head of Tor Books. 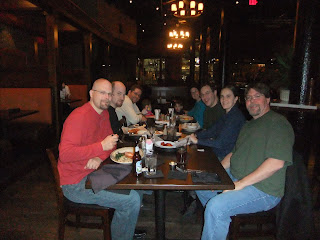 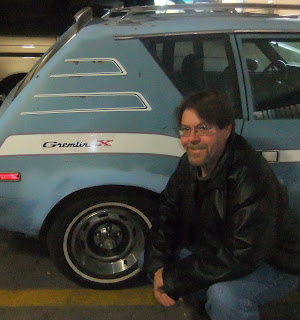 A treasure found in the hotel parking garage.
Posted by Alex Bledsoe at 4:58 AM No comments:

The Loving Dead: zombies with one thing on their minds 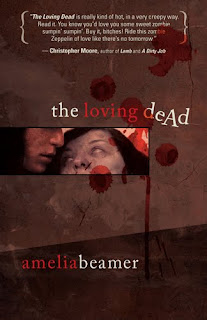 But there's more at work here. For while the book breaks a lot of my zombie preference rules, it does include one thing I believe is essential for every good horror story: a level of metaphor. The Loving Dead may be about individual characters, but it's also about a specific class of people: disaffected urban twentysomethings so unused to having anything truly matter that, when the first zombies appear, their initial reaction is to pop in a DVD of Night of the Living Dead. Not to get survival hints, mind you, but just because of the association.

Michael and Kate are platonic housemates and co-workers at a San Francisco Trader Joe's. They throw a costume party the night the zombie apocalypse begins, and initially think it's all part of the game. When they realize it's not, but can find no corroborative evidence on TV or the internet, they're completely at a loss. Separated for most of the story, the twin narratives draw them together at the safest place they can imagine: the island of Alcatraz.

The book reminded me most of a fairly obscure Japanese SF film called Matango, or in America, Attack of the Mushroom People. In it, a shipwreck maroons a bunch of 60s-era affluent Japanese on a strange island, where they contribute absolutely nothing to their own survival before they apathetically mutate into the titular mushroom people. In its native country it was seen as a mocking attack on middle-class complacency; recut for the States, it came across as a big helping of WTF? But The Loving Dead shares its sense of a generation so unaccustomed to anything geniune that, when real danger arrives, they can only ignore it, or relate to it through pop culture. By the end, it's an open question whether the zombies or the humans are the most adrift in their world.

The Loving Dead is published by Night Shade Books.
Posted by Alex Bledsoe at 4:26 AM 1 comment:

Helsinki Homicide: ice cold crime without "girl" in the title 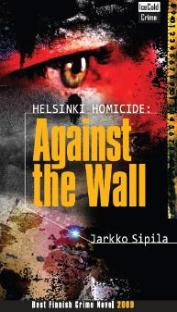 Scandanavian thrillers are all the rage right now thanks to Steig Larsson, but I've been a fan of this sub-genre since Peter Hoeg's novel Smilla's Sense of Snow and the original Norwegian version of the film Insomnia. Larsson's Millenium trilogy may be the Hunger Games of its moment, but recently I discovered another Scandanavian author, from Finland, whose crime novels are much more to my taste.

Jarrko Sipila is a novelist and crime reporter whose "Helsinki Homicide" series has just begun being translated into English. The first one, Against the Wall, won the 2009 award for Best Finnish Crime Novel. It details the investigation into the murder of a young hoodlum mixed up in customs fraud, and follows parallel paths as both the criminal underworld and the police force seek the motive behind the crime.

It does something I love, best exemplified by the Michael Mann film Manhunter: it makes you hope that real cops are as smart, resourceful and tenacious as the ones in the story. The team under Lieutenant Kari Takamaki is unified by their dedication to duty, a Hawksian professionalism that needs no trite character justifications. These men and women do their job because it's their job, and they get their satisfaction from doing it to the best of their abilities. This is what separates them from the criminals, who are equally smart and resourceful but prey to disloyalty, greed and complex bonds of loyalty and revenge. The cops win by essentially maneuvering the bad guys into tripping over their own worst tendencies.

It's a bit hard to evaluate Sipila's style, since it's translated to English from Finnish; apparently the only word the two languages share is "sauna." He started as a journalist, so I imagine in his native Finnish his prose is punchy, succinct and vivid; if it's a little clunky in English, I can live with that. I had no issue with one common criticism, the complex Finnish names, except where two very similar ones (Lindstrom and Lydman) were concerned. Still, the cleverness of the plotting, the broad strokes of character and the unique milieu come through just fine. And what connects with the reader is the universality of it all: criminals have the same motives in Helsinki that they do anywhere else, and cops want to catch them for the same reasons they do in New York or LA.

Against the Wall is followed by Vengeance, which is near the top of my to-be-read pile. Hopefully more of the series will make it into English as well, because tough, honest crime novels are always welcome.

Sipila's novels in English are available directly from the Minneapolis publisher, Ice Cold Crime.
Posted by Alex Bledsoe at 12:31 AM No comments: