It's not every movie that can overcome the total miscasting of its titular character, let alone a title that is completely misleading. Yet 1943's Son of Dracula, starring Lon Chaney, Jr., does exactly that. Not only does the beefy roughneck Chaney attempt the role of the sophisticated Eastern European count, but there is no "son": the story features Dracula himself. But if you can look past these shortcomings, a surprisingly easy thing to do, there are some real treats in this second-tier Universal film. 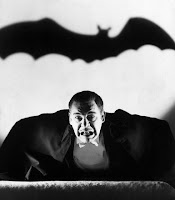 Dracula arrives at Dark Oaks, a plantation somewhere in American's Deep South where no one has an actual Southern accent. Since he's apparently a well-known fiend, he calls himself Count Alucard (the first use, I believe, of this popular hiding-in-plain-sight anagram). He has been brought back as a souvenir by Kay (Louise Albritton), an American tourist and proto-Goth just returned from Hungary.

Kay's nefarious but ingenious plan: have Dracula turn her into a vampire so that she can then vampirize her childhood sweetheart Frank (Robert Paige); together they can kill Dracula and live forever. But she neglects to let Frank in on her plot, which leads to misunderstandings and apparent murder.

It's hard to imagine an actor less suited to Dracula than Chaney. Thick-necked and with the diction of a factory worker, he looks out of place and uncomfortable in Dracula's dinner suit. Luckily the film keeps him mostly off-screen and builds its story around the gradual freak-out of hero Frank Stanley. Frank begins the film as a standard dishwater-dull young male lead, but as things go to hell, he goes to pieces. Albritton makes a deliciously strange heroine, and as her chilling plan emerges she becomes far scarier than Dracula. Still, I defy anyone to really watch the film and not get a twinge of heartbreak at the abrupt but poetic ending. 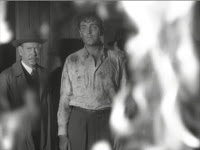 What makes this film exceptional, and different from all the other Universal Dracula films, is that ultimately Dracula is as much a victim as anyone else. In effect he's outsmarted by one of his own brides, and part of me wishes the film had him join forces with the other mortals against Kay. But that wasn't the story the Siodmak brothers (director Robert and screenwriter Curt) chose to tell; instead they remained in the realm of fairy tales, telling an Orpheus-istic story about love that transcends, for a while, the grave.

Soon I'll Be Stuffed in Your Mailbox

This postcard will be going out from the cool-as-heck folks at the Lemery House to promote an upcoming reading. I've never been the subject of a direct-mail campaign before. 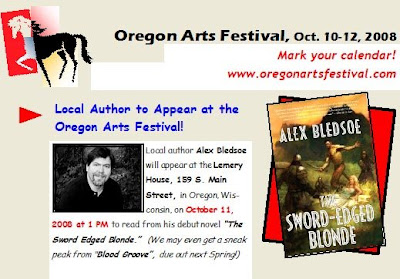 Gateway Characters (in Hell or Alaska)

Lately the mater familias and I have been watching Northern Exposure, a show I caught only haphazardly during its network run in the early 90s. At the time I much preferred the grittier fantasmagoria of Twin Peaks to the bucolic magical realism of Northern Exposure; as I've mellowed (i.e., gotten older), though, I find that Northern Exposure (hereafter referred to as NX) has a charm and depth I completely missed before. But it developed a fatal flaw, one I also recently encountered in the otherwise-brilliant Hellboy 2: The Golden Army.

NX shows us the quirky citizens of Cicely, Alaska through the eyes of Joel Fleischman (Rob Morrow), a newly-minted Jewish doctor from New York. He is completely at odds with everything Cicely represents, and isn't afraid to say so. The show's effect comes from the clash between Fleischman's Woody Allen-ish nebbish and the unflappable folks around him, especially tomboy pilot Maggie O'Connell (Janine Turner), who verbally gives as good as she gets. 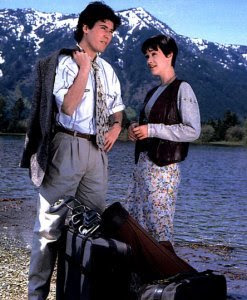 In the final episode of Season 3 ("Cicely"), we learn about the founding of the town itself from a century-old eyewitness (the great Roberts Blossom). It's a brilliant episode on a number of levels, and ends with Joel alone in the local bar, hearing these voices of the past and taking his first big step toward assimilation. It promised great things for future episodes.

Unfortunately, by the start of Season 4 Rob Morrow ran into difficulties with the show and his role in it. As a result, Joel's importance was significantly minimized, and the momentum built up during Season 3 was completely lost. Worse, the show itself floundered because without Joel as the pivot, the other characters became a group of people who were merely quirky for the sake of being quirky. Some fans insist the show changed organically from being about Joel's situation to being about the town itself, but what made the show compelling was the tension between Joel and the residents of Cicely. Without it, the show lost its rudder and the viewer lost his or her guide.

Now we jump to Hellboy. In the original 2004 film, Rupert Evans played Myers, a normal, straight-arrow FBI agent assigned to be the liason between Hellboy and the rest of the world. Myers' responses to the characters and situations gave the viewer something normal to hang onto amidst the weirdness, in the tradition of many other SF and Fantasy stories (one reason Luke Skywalker was made a simple farmboy). As Myers warmed to Hellboy we did, too, and as he kept faith in Hellboy's essential goodness, we did as well. 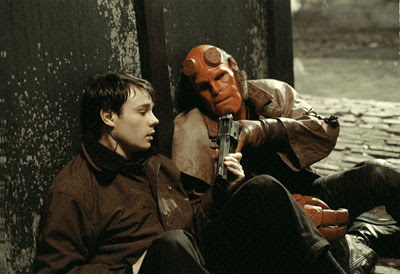 In Hellboy 2: The Golden Army, we have no Myers (he's been transferred to Antarctica) or, more crucially, no Myers-type figure. Everyone in the story is a monster or creature of some sort (Jeffery Tambor's Manning is human, but so clearly comic that he can't take on the gateway role). As before Ron Perlman makes Hellboy into a likable blue-collar schmo, and the other performers bring emotion and heart to their creature-feature characters. But it's all a little disorienting without a Myers to guide our responses. We're not immediately sure which monsters should be considered outlandish and which ones commonplace.

There are still many great things in Hellboy 2 and the later seasons of NX. But with the loss or minimizing of these gateway characters, we've lost our way into these worlds. I miss Joel, even though he's technically still around for Seasons 4 and 5, and I hope Myers gets back from Antarctica in time for Hellboy 3.
Posted by Alex Bledsoe at 2:17 PM 1 comment:

Possibly the best review I'll ever get

A special belated shout-out to gladiolii, whose blog post discussing my novel The Sword-Edged Blonde contains what may be the best review I'll ever get:

"The main character is cooler than I'd have expected, for an old guy."

Thanks, Kit, and I hope you like the next one as much.
Posted by Alex Bledsoe at 8:43 AM 2 comments:

I don't have a lot of real-world heroes as an adult. There are people whose work I admire, and whose accomplishments I find impressive, but for me a hero is about being as much as doing. The late Steve Irwin and Charlton Heston were heroes; among the living, Bruce Springsteen and George A. Romero currently qualify.

But no one is a hero the way they are when you're a kid. I grew up before the new wave of historical revisionism that provided much needed context for the allegedly "heroic" deeds of our forefathers. Back then, Columbus was a great explorer and Andrew Jackson was a brilliant leader; their genocidal crimes against native populations were considered the cost of doing business and never mentioned. But one of my childhood heroes survived this sea change in how explorers and leaders were judged, and remains one of my heroes both for his accomplishments, and for the kind of man he was: Roy Chapman Andrews. And a recent (2001) book does a great job explaining why.

In Dragon Hunter : Roy Chapman Andrews and the Central Asiatic Expeditions, Charles Gallenkamp tells of Andrews' trips into the Gobi Desert of China in 1922-1930, leading expeditions in search of fossils and other scientific information. Among the many significant discoveries were the first confirmed fossilized dinosaur eggs. At the time, it was the equivalent of the moon landing in popular culture, and everyone knew of Andrews and his work: 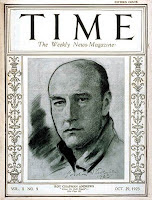 Half a century later, his desert-traipsing bravado, encyclopedic knowledge and snappy headwear helped inspire one of the great movie heroes, Indiana Jones. 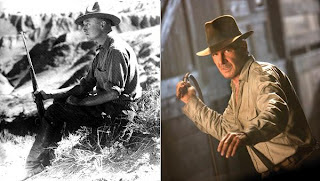 What Dragon Hunter explains, though, is how much real courage and resourcefulness Andrews demonstrated behind the scenes, negotiating with the Chinese government both before and after the encrouchment of Communism. Andrews, a native of Beloit, WI, adored Asia, learned its languages and customs, and had nothing but contempt for both the desert warlords and the later Communist bureaucrats. He saw both as exploiters of China's people and resources. He also compiled one of the first comprehensive studies of the world's whales, functioned as a spy for the U.S. during World War I, was president of the famous Explorers' Club, and found time to write books both for adults and children. 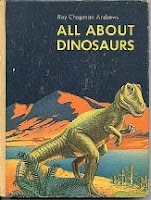 I owned All About Dinosaurs, written in 1953, when I was a child in the early Seventies. Chapman described his Mongolian expeditions in simple, exciting terms, concentrating on the battles with the elements and the discovery of huge numbers of fossils. There were no politics, only the hands-on wonders of exploration. It crystallized my love of dinosaurs, even though at the time its science was already fifteen years out of date. Under its spell, I wrote to Andrews at the Museum of Natural History, and experienced the kind of disappointment only a child can feel when the letter was returned marked DECEASED (Andrews died in 1960).

Andrews was not without flaws; he was, after all, a real person. But he stayed true to his principals until the end of his life, by all accounts tried to always do the right thing, and enjoyed both the respect and envy that only true pioneers can inspire. More importantly, he inspired others to follow in his footsteps. Now that I'm facing middle age in a world where heroes are in shockingly short supply, it's nice to be reminded of someone like Andrews. He did his job, remained a decent human being and, in his own way, changed the world.
Posted by Alex Bledsoe at 8:22 AM 3 comments: