Torchwood: For grownups, but not by them 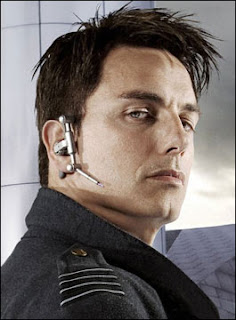 Captain Jack Harkness, who is VERY pleased to meet you.


As part of our immersion into the universe of Doctor Who, the management staff at Chez Bledsoe has been watching the first season of Torchwood. Basically an English (well, Welsh) version of The X-Files, it's about a super-secret team who deal with otherworldly and paranormal dangers that beset contemporary Cardiff.

It doesn't take many episodes before you realize that the Torchwood team is its own worst enemy. Whatever the qualifications for joining, they seriously need to be rethought: in nine out of the ten first episodes, the primary danger is caused by a member of Torchwood (and in that tenth episode, nothing happens. Pretty much literally). The cast is interesting, the budget more than adequate, and the premise rich. So what's wrong?

Torchwood tries very hard to be cutting edge, especially in its approach to sexuality. The leader, Captain Jack Harkness, will, ahem, shag anything that moves--male, female, or other--as long as it's gorgeous. Computer whiz Tosh has a lesbian fling with an alien disguised as a human woman. Gwen and Owen, two team members, have an ongoing affair, and it's implied that uptight Ianto and Captain Jack have an occasional after-hours tryst. None of these are bad ideas, but they're also not thought through. The writers have people shagging for no apparent, logical reason except that it's titillating.

And that's when I realized what was fundamentally wrong about the show.

Torchwood feels like a fifteen-year-old's view of how adults act. Since most teenagers are obsessed with sex, so are the Torchwooders. But since most fifteen-year-olds don't have a lot of experience with sex, the relationships feel forced and phony, more like masturbatory fantasies than real encounters. Most teens have never held jobs, let alone jobs with responsibility, so they imagine worksite conflicts that simply wouldn't occur among highly-trained and supposedly elite team members. Instead of professionalism, we get playground arguments transposed to Torchwood HQ. Fights break out, but like playground fights, the next day they're forgotten--even when one team member threatens another with a gun.

I doubt that the writing staff on Torchwood is seriously fifteen years old. Instead they're likely the same kind of "talent" you see everywhere now: people raised on movies and TV who have gone into the industry at such a young age that they have no real life experiences to bring to their writing, only bits and pieces of other shows and movies. In some cases, such as the films of Quentin Tarantino, that's enough. Here it's not.

We'll probably continue watching the show, alternating it with Doctor Who. I've heard from multiple trustworthy sources that season 2 gets much better. And perhaps it does; after all, fifteen-year-olds do eventually mature, even if only a little bit.

What's most baffling to me is that the same talent that can produce some truly moving/amazing stories on Dr. Who can't do it on Torchwood. But Capt. Jack is certainly very nice to look at, even when he's over/under acting at every possible moment.

Give it more time. It grows up too. The new season on Starz is leaps and bounds better. Trust.

So far, I haven't seen either of the first two seasons. My first experience with Torchwood was Children Of Earth, the 5-episode third season. Minor plot holes and odd character behavior aside, Children Of Earth was exceptional.