My upcoming novel BURN ME DEADLY involves, in part, a group who worship fire-breathing dragons. Because really, if you're writing fantasy, eventually you have to deal with dragons in some fashion. They're a trope, like swords and/or sorcery. Ignoring them would be like leaving the horses out of a western.

Not that I mind. Dragons continue to fascinate us because, much like vampires, they can symbolize practically anything a writer wants them to represent. Just look at the cultural differences between Asian dragons and their European counterparts, and the richness of the creatures as metaphors becomes apparent.

Still, everyone has a "first dragon," the one that awoke their sense of wonder about the creatures. For many it's Anne McCaffery's elaborate world of Pern, where genetically-engineered intelligent dragons bond with their riders; for others it's Smaug in The Hobbit, guarding his hoarde deep in a cave. But for me, it was the awesome Vermithrax from the 1981 film, Dragonslayer. 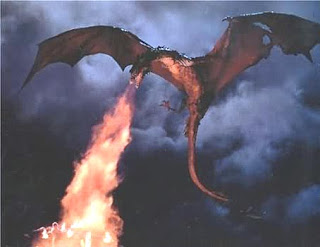 At the time of its release, Dragonslayer got a bum wrap for "ripping off" Star Wars. There's a naive young hero (Galen, played by Peter MacNicol) who is mentored by an old wizard portrayed by a distinguished British "Sir" actor (Ralph Richardson). There's a semi-magical weapon (a special lance, the "Dragonslayer" of the title) and a big, black-clad villain (Tyrian, played by John Hallam). Even Emperor Palpatine himself, Ian McDiarmid, has a small role as a village priest.

Of course, in the hindsight of twenty-plus years we can see these as simply standard fantasy elements that Lucas borrowed as well, and it's more interesting what the film does differently. Yes, there's a noble and strong-willed princess, but she's not the heroine. There's a Twelfth Night element in one bit of masquerading (the sole part of the film that simply doesn't work). And the medieval setting is vividly realized, helped by the suitably ponderous Alex North score.

Then there's the dragon.

First and foremost for me, Vermithrax maintains the integrity of basic biology. She's clearly a reptile, and so has only four limbs: her wings are modified front legs, similar to a bat's, or fossil pterosaurs. I'm endlessly annoyed by the six-limbed dragons (four legs plus wings) depicted in standard fantasy. No vertebrate has more than four limbs, and that counts wings. Saying, "it's a fantasy story," is a dodge, not an acceptable explanation.

Second, Vermithrax is scary. She eats human sacrifices, breathes fire and leaves a path of destruction. When she first appears, emerging from a literal lake of fire to tower over the hero, she's awe-inspiring.

Third, she doesn't talk. The dragons of Pern communicate telepathically, which is justified since they're genetically engineered to do that. But the chatty Draco in the inanely hokey Dragonheart has started a trend of talkative dragons that would embarrass even Walt Disney. Dragons are reptiles: they have no lips, and no mammalian voice boxes. Again, saying, "it's fantasy so it's okay," is an evasion, not a justification.

All subsequent dragons have been measured against this considerable standard. In fact, in the twenty-plus years since Dragonslayer, I've only encountered one other dragon that came close to equalling its impression on me (more on that in a later post). When it came time to create my own dragons, Vermithrax was my starting point.

The dragons worshipped in BURN ME DEADLY are folkloric, ancient creatures that, if they really existed, lived long before the dawn of man. They flew, and breathed fire, and laid waste to everything in their paths. They have qualities (intelligence, a compulsion to vengeance) that don't quite mesh with reality, but much of this is caused by the way stories change over time. Were there real dragons in the story, they would be much more in line with what I describe above: plausible, genuine, and terrifying.

But there are no real dragons...are there?

Leave a comment about your own "first dragon" before the end of this week and be entered to win one of three signed copies of The Sword-Edged Blonde paperback. One lucky winner will also receive an advance reader copy of Burn Me Deadly.

I must admit I don't have a favorite dragon.I know that there are a lot of dragon lovers but I have never been interested in dragons.
But I will read "Burn Me Deadly" even the story contains dragons.
And for all of you who like dragons have a look at following sites in case you don't know them:
Dragonorama, Draconica

The first literary dragon I remember is from Frank Peretti's 'The Oath'. Dark, evil, malevolent but ever so clever and intelligent.

But an intro to dragons? I grew up reading folklore. I don't remember a time without dragons. They've always fascinated me more than any other mythological/fantasy creature.

And I have yet to finish a story that doesn't have a dragon.

My first dragon experience was at Fannie Mae Dees Park in Nashville. While not a dragon exactly, its size fueled my imagination when reading about Skye, the blue dragon ridden by Kitiara, in the Dragonlance Chronicles series. Skye was a gigantic blue dragon whose breath weapon wasn't fire, but instead lightening. He could fry and opponent leaving a smoking charred husk without so much as an after thought. He and Kitiara were an almost unstoppable team. Dragon and rider willing to sacrifice themself to save the other. Skye was also "human" if you will. He desired Kitiara and was extremely jealous of the physical relationship between Kitiara and Tanis.

Dragonlance was also the first series I read that distinguished between good dragons, the metallic dragons, and evil dragons, the uhm other colors. I was intrigued by the loving environment that the good dragons were fostered in versus, well, the survival of the fittest, i.e. eating and maiming their fellow hatchlings, of the evil dragons. Good dragon eggs could also be corrupted by priests of the goddess Takhisis and transformed into the equally evil Draconians.

Dragonlance, like Brian Lumley's Wamphyri, totally altered how I approach the fantasy genre. The dark, twisted, and sadistic characters are the ones I love best.

Wait should I be telling you this?

I wish I remembered the title and author of the story that contained my first dragon. It was in a book of children's literature and featured a friendship between a dragon and a boy. (As I recall, the boy kept saying, "You don't say!" and the dragon answered, "But I do say.") The illustration showed both of them slurping floats through straws at an ice cream parlor; the floats counteracted the fire the dragon breathed. Thus disarming the dragon, the boy became a hero to the adults who'd been terrified of it.

Around that same time (but a bit later), I found my second one (actually a creature part dragon, but I'd read it as a dragon) in a book of Japanese folktales. You can read "The Gratitude of the Samebito" here. I'd lost the story for almost 40 years and finally rediscovered it at the Mukashibanashi Library website.

I suppose Pern, strictly speaking, was my first literary dragon (the least said about my actual first dragon the better). However Vermithrax Pejorative was my first proper dragon. The film inspired me with a rampant cynicism for the idea of "bringing the magic back". It also was my first encounter with the idea that magic means "chanting in Latin" — fine for the film, but when I see it now... Oh dear. The Worm of Thrace Who Makes Things Worse was the first fictional beast I encountered that was unashamedly, proudly draconic, as opposed to something that only gave the impression of being wild and was little more than an external embodiment of superpower wish-fulfillment for the human characters.

Terry Pratchett: I see what you did there. Oh yes, you devious man.

I got such a laugh when I heard the animatronic fire-breathing dragon at the movie theatre at West Edmonton Mall (my home away from home) was nicknamed Smaug. I always get such a thrill when the music picks up & he starts to move, blazing out a burst of fire.

My first encounter with dragons was the dragon from Beowulf. The first dragon I might presume, since the Smaug, in the Hobbit, was almost identical. They both lived underground hoarding vast amounts of treasures. And since Tolkien was a student of Norse mythology, I can believe that it is what inspired his story.

My first dragon was Ruth in The White Dragon—a wonderful coming-of-age fantasy for a shy fifteen-year old girl. I devoured every book in the series and desperately wanted a fire lizard of my own!

My very first dragon was Patricia McKillip's dragon Gyld from The Forgotten Beasts of Eld, which was my very first fantasy. I read it when I was twelve-years-old and fell in love with the genre. The Pern series closely followed. I remember reading Pern as a novella in the Magazine of Science Fiction and Fantasy.

My first recalled dragon was the imposing Tiamat of the old Dungeons and Dragons 80's cartoon show.

She didn't fit your ideal dragon biology with four limbs and wings, the ability to speak and having five heads. But Tiamat was the WMD of the D&D universe, even major bad guy Venger was afraid of her.

My dad bought be a D&D sticker book for an early birthday and upon seeing the painting of Tiamat on the front cover I tore it off and stuck it up on my freshly painted wall with blutac. Not sure which of these actions he was more mad about!

I think Smaug was probably my first intro to dragons, with the Pern dragons close behind. But a favorite will always be the dragons in Barbara Hambly's Dragonsbane books.

Like e_journeys, my first dragon was in a children's book. Mine was the dragon from the Dear Dragon series by Margaret Hillert. He celebrated holidays and everything!

Not the traditional dragon-y dragon. More like a friend in a dragon suit. :)

Thanks to everyone who entered the contest! I really enjoyed reading about your "first dragons."

The winners of signed copies of "The Sword-Edged Blonde" paperback are EyeWrite and Buster9. Please let me know your mailing addresses; your blogger profiles don't have any way to contact you.

The grand prize of a signed SEB plus an advance copy of "Burn Me Deadly" goes to Teresa Frohock! I've sent you a message via your web page.

Thanks again to everyone who entered. I'll be doing more giveaways in the near future, too!