Some have brewed a ha-ha about a new edition of Mark Twain's The Adventures of Huckleberry Finn that removes what is euphemistically called "the N word" and replaces it with the word, "slave." This has brought all kinds of interesting trivia to light ("the N word" is used 219 times in Finn, "slave" is not actually a synonym for it, Finn is the fourth most-banned book in the country, etc.). But as I read the ever-increasing attempts to be the most offended by this, I can only think: what's the big deal? It was done twenty years ago, too, and no one thought anything about it. In fact, it's been done multiple times.

The one with which I'm most familiar is part of the Great Illustrated Classics series that takes well-known (and public domain) novels and repackages them for young readers, simplifying the stories and adding illustrations on every facing page. We have a shelf of them, and I've enjoyed reading them aloud to my kids (my oldest son's favorite is Journey to the Center of the Earth). And we've read both Finn and Tom Sawyer. Finn was published in 1990, and to my knowledge has never stirred the least bit of ire. 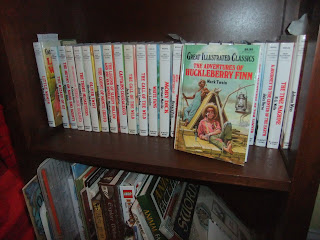 Now I admit, in reading Sawyer, it annoyed me that villainous Injun Joe was now "Crazy Joe." I understood the impulse to change it, but I disagreed with it. Similarly, in their version of Finn there's no "N word," and the dialogue has been rewritten so that no one-for-one substitution is needed. Jim is a slave, and that's enough.

So why all the outrage about this new edition that boldly goes where...well, many have gone before?

Probably for two reasons. First, the recent release of The Autobiography of Mark Twain, a volume he stipulated could only be published a century after his death. It's both a best seller and a critical darling, so Twain is back in the public eye.

And two...well, now there's the internet, and people on the internet love to be offended. Any time there's an issue like this, people rush to show how outraged they are, in a pile-on usually as distasteful as whatever the original offense might've been.* You can see some of it here and here. Even Roger Ebert, who should really know better, chimed in with a particularly crass and tasteless tweet.

Yes, rewriting Finn bugs me, but I'll respond in the proper adult fashion: by not buying this edition. That's all any of us need to do, to register our disapproval. I won't rant and rave about the greater social ills its existence reveals, or try to show how much more it offends me than it does anyone else.

I'm not defending this editorial bowdlerizing by any means; I disapprove of it, and think the concepts behind it are both shallow and wrong. But it's not real censorship as long as the original text is available. And I'm pretty sure it still is.

*(And yes, I recognize the potential hypocrisy in saying this in the context of a post that could be interpreted as doing exactly that. If you think so, please disregard anything I say.)

Perhaps I'm not disagreeable enough, because I agree with you here Alex. If you don't like it, don't buy it.

Would I let my kids read the original version? Yeah, I think I would, once they're a bit older. But living in SC, I'd sure talk to them about it-in depth before they left the house.

You know... I have been reluctant to comment on this issue yet because I feel that since I am as caucasian as they come, I have no right to say that it is 'no big deal'.

However. I feel like we shouldn't change works of literature simply because we don't like its contents. In the time of Finn's writing, the "n" word was used as just another word. I personally abhor the word. I cringe even when African Americans use it for each other. It's just a bad word.

But when you read it in works of literature like Finn... I think the reader needs to acknowledge the context in which it is offered from. It is also a great lesson- an illustration of how far we have come.

That's just my two cents. I agree with you though-- if you don't like the new version, don't buy it. On that same token, if the old version offends you, don't buy it either.

Have a great Friday!