In 1978, I was as hardcore a geek/nerd/dweeb as a boy could be. Star Wars had come upon the world, legitimizing those of us who read books with spaceships and monsters on the covers (and got beaten up by our cousins for it, but that's another blog post). Starlog magazine was hot. TV had The Six Million Dollar Man, The Bionic Woman and the original Battlestar Galactica. Even music was jumping on the star wagon: Styx had spaceships at the climax of "Come Sail Away" and a Tolkein tribute song on their album Pieces of Eight. Heck, the entire British progressive rock scene owed as much to fantasy literature as it did to rock and roll. The time was right for me to undergo the final metamorphosis into the kind of genre fan and writer who lives, breathes and dreams about spaceships and dragons, lost in a world of imagination and whimsy.

But I was saved at the last minute from this darkness, by Darkness. 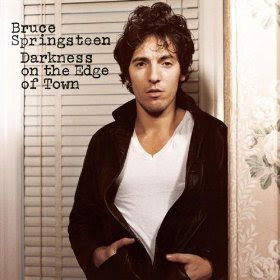 Bruce Springsteen's fourth album appeared in 1978. Prior to this, I knew him primarily from FM radio, which had introduced him via "Rosalita (Come Out Tonight)." But now I was right there for the new album, and because of it, nothing would be the same.

The music on Darkness is solid and muscular, made up of snarling guitars and surging keyboards. But the lyrics are what make it special, and what made me connect with it. The romantic escape of his prior work is gone, burned out and swept away. Every song is about people trapped in small-town lives, in soul-crushing ennui where dreams no longer matter. Yet in each song is a kernel of something that might be hope.

What really spoke to me were the songs about fathers and sons. By its very title, "Adam Raised a Cain" states its purpose, and musically recreates all those arguments between every dad and every son. "Factory," which at first seems so slight it might be filler, actually described my own father's life in painful detail. In fact, for the first time I realized it was possible to make music--and by extension, any kind of art--from someone's own life. Not in the literal autobiographical sense, but through feelings that everyone understood and experienced, emotions other than the "love/escape/party" music on the radio. Or the "heroic destiny/good vs evil/love conquers all" tropes at the heart of what I read, listened to and watched.

Because of this music, I stayed connected to the world in a way I otherwise might not have, and often against my will. No matter how much I wanted to disappear into the Federation, the Rebellion, Pern or Shannara, the Boss would drag me back. Because I became a long-term Springsteen fan, I couldn't ignore or escape the real world. And when I began to synthesize the things I loved (horror and fantasy) with this real-world connection, I found my voice as a writer.

This is all fresh in my mind due to the release of The Promise, an exhaustive 3 CD/3 DVD set chronicling the making of the album. But I'd steer anyone interested simply to the album itself. Everything I talk about is there. And if you're a fan of my books, then you'll be able to share the moment when I turned onto the path that eventually led to the stories you enjoy. 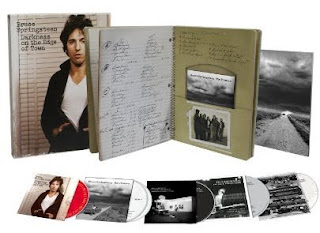 "Lost but not forgotten, from the dark heart of a dream." I still remember the first time I heard "Adam Raised a Cain" and it raised chills along my arms. Damn it. Now I have to dig it out and listen again.

Honestly, I've never heard it before. Maybe that explains a lot in terms of my delayed maturity. But if you recommend it that highly, I'll be consuming it as soon as time permits.

I concur with everything you say here, and some more so besides, but would also like to add how much I am in thrall to the generosity Springsteen gives us in the notes that accompany the box set you've copied and pasted up there.

Don't get me wrong, that in order to witness the humility on offer from The Boss, you have to shell out heavy dollar to be witness, as I - or rather my dear mother - did when she sent my Christmas money through PayPal recently. This much insight into an uncertain psyche should clearly come at a price, and it's one that I certainly could not have afforded otherwise.

In the spiral bound notepads that you see Springsteen using at the original sessions on the documentary DVD, pages that are fantastically recreated here, you get virtually everything that he wrote as he was writing it down in his often indecipherable spider-scrawl. It's an insight into a man who wasn't even sure what he was trying to become, but which he pursued endlessly, something that shows strong in the tired faces of his band in the footage. He must have written almost everything down.

As with his previous Prodigal Son demos from 1972 - recordings that Springsteen went to court to prevent seeing wider release - a good deal of the writing in the notebooks is not very good at all, at times a little hackneyed, clumsy, and hugely unrepresentative of the confidence we had all seen before.

It's testament to the older Bruce that's he's allowing us the sacred peek here. In interview recently he said that he would never have allowed this stuff out previously, being embarrassed at what he referred to as the teenage poetry of it, but it bolsters the story so much more to realize what wonder came from these very humble beginnings.

(I'm just trying to imagine Alex allowing us access to his every scrawled and half crossed out workings for one of his works. It wouldn't happen, would it?)

I only received this set yesterday (I bought the triple LP version of The Promise too, this time with my own money) and so haven't ventured into the full scale of the thing, but am so much looking forward to it.

Oh yeah, and I gotta say that when Darkness came out I was in full UK punk rock mode. It was 1978 and I was buzzing to the Pistols, The Jam, Costello, XTC et al, and so I didn't buy it that year. It's only when I scored tickets to The River tour in 1981 that I went back and bought the back catalogue.

I'm from England, and so had no idea what a 'fuelly head' was. I had no clue what a New Jersey turnpike was either. There were loads of them in Bruce's work. I still don't know what some of the stuff he writes about means, but the older I get the more invaluable it is to me trying to work it all out.

I'm gushing now, so shall stop. But one last thing I want to say, and that is that maybe with him listening back through these old songs, he'll find some of that fire back and hopefully never release something as dull as Working On a Dream ever again.

See, I don't write as fluently as Alex, but I sure as shoot know what it is I'm trying to say.

Great blog, I loved it! I wasn't born until 1985 but I can appreciate the Boss and Styx and in my few years, space and monsters have made a comeback and vampires were but no one wrote them right. Thanks for taking us readers back to a cooler time of geeks and old school rock.