Do I want to know Me and You and Everyone We Know? 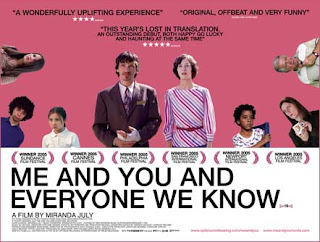 Madison, WI poet Lisa Marie Brodsky recommended Miranda July's 2005 film Me and You and Everyone We Know, and I finally watched it over the holiday weekend. It's an indie film in the broadest sense, made by an outsider artist and about outsider people, some of whom do things so confoundingly odd that you wonder if they exist anywhere but in a film like this.

It's a film about relationships, about people reaching for meaningful connection in all the wrong ways. The central character, Christina (Ms. July), is a conceptual artist who sends positive messages out into the universe in the (so far) vain hope that they might bring love and happiness into her own life. She meets Richard (John Hawkes), a divorced father of two who barely functions and perpetually looks quite literally stunned. Richard's two children have inherited this inability to make appropriate decisions about closeness, leading them to odd connections with some of the other characters. It's one of those films where everyone turns out to be far less than six degrees away from everyone else, whether they know it or not.

July herself, as Christine, is a touching screen presence, so delicately lost and lonely that her art-inspired attempts to reach out seem incredibly brave. As a writer, she has penned not just this script but a collection of short stories, and knows how to structure multiple narrative lines so they flow and resonate. And as a director, she gets amazingly unaffected performances from the younger actors. 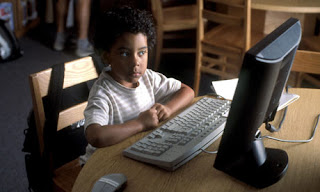 The issue I had with the film was how I felt about some of these connections. It's clear what the movie wants me to think, as every shot and music cue is used to cast a wistful, hopeful glow over things that perhaps shouldn't be considered as such. Some of the connections--for example, between a first-grader and an unknowing adult woman via online sex chat--are just inherently uncomfortable, and no amount of sensitive scoring or empathetic performance can overcome that. So I tried to decide: do I give in and feel what the film wants me to feel, or do I stay true to my own deep-seated and possibly Philistine responses despite my wish to like the film's view of the world?

Speaking of these same issues, Rogert Ebert in his review says, "I know this sounds perverse and explicit, and yet the fact is, these scenes play with an innocence and tact that is beyond all explaining." In Variety, Scott Foundas says these things "...sound puerile or even irresponsible, then it is all the more to July's credit that she embellishes such moments with a whimsy and melancholia that makes them seem less about sex than about making meaningful connections with other human beings." So should I admire this, the way Jessica Winter does in the Village Voice ("...July ascribes sexuality to persons under the age of consent without coyness or moral hectoring") or should I go with my emotional reaction, driven by my feelings as both a parent and a writer ("The movie engendered the kind of uncomfortable, crawling-out-of-your-skin feeling I get when I'm subjected to bad performance art," as said by Sam Adams in Philadelphia's City Paper).

Even after a few days pondering it, I'm still not sure. I know what Ms. July wants me to feel; I just don't know if I'm ready, willing or able to feel it. I asked Ms. Brodsky, who'd originally recommended the film, for her thoughts and she summed it up pretty well: "Miranda July is a brilliant voice in contemporary literature and film. She seems to do everything. She'll also make you squirm in your seat with the uncomfortable truth, so beware."

Alex - good article. I think watching or hearing the truth is a new thing to people. It's ironic because movies are all about shock value now... with special effects and violence... but take Ms. July's film - take the truth of children exploring sexuality on the internet and it's just as uncomfortable as innane violence in a WWII movie... yet still the truth.

As a parent of a first grader, I'm not interested in that kind of truth. Lots more to say on that, but I'll save the rant for my own blog.

It sounds interesting, but I doubt I'd get past the EWWWW factor, alas.

I was comfortable with it and bought into it completely when I first saw it, but by a month or so later I thought it was an awful movie. I don't have an intellectual reason for that; it just didn't ring true for me in the end.