"Born Originals, how comes it to pass that we die Copies?"--"Conjectures on Original Composition" by Edward Young, 1759

I'll tell you up front, this is a rant. I try not to do them often, and usually delete them after I write them. If you're reading this one, it means I'm still fuming even after an acceptable cooling-off period.

Io9, the go-to website for SF news, recently ran this article by site managing editor Charlie Jane Anders about Ron Moore's "bible" for the series Battlestar Galactica. In these notes for series writers, Moore claims he's after "nothing less than the reinvention of the science fiction television series."

That's all well and good, except for one thing: it was a remake. All the heavy lifting of creating the concepts, the basic spaceship designs, the names of characters and their home planets, even the all-purpose curse word "frak," was done by Glen A. Larson back in the seventies. Whatever you may think of the original show (and you won't hear me sing its praises, believe me), you have to acknowledge that Moore is, in effect, putting a new coat of paint on the house Larson built. Painting a house is hard, but it's not nearly as hard as building one from scratch. Or even more harshly, you could say that Moore is pissing off of Larson's shoulders, and judging from the article's final line--"And it's definitely a reminder how fresh and exciting the show was when it launched."--there's quite a few people standing below with their mouths open.

That's a crude judgment of creators and fans, I realize. People are entitled to make what they want, and like what they want. But goddamn, people. In her review of the movie Burlesque for Entertainment Weekly, Lisa Schwarzbaum nails it: "[In] these American Idol times...we agree to pretend that mediocre mimicry of better artists is good enough to keep us entertained." I make no case for the original Battlestar, but its remake is certainly not unique or different enough to count as "the reinvention of the science fiction television series"; it may not be mediocre mimicry, but it's still mimicry. 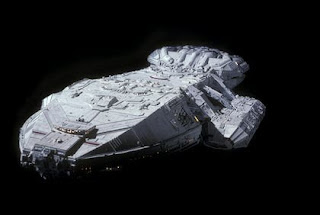 If Ron Moore really wanted to reinvent the science fiction television series, he could've taken the original Battlestar as an inspiration and come up with his own ideas for setting, backstory, names, etc. In other words, he could've MADE UP HIS OWN SHOW. It's okay to 'fess up to being influenced; everyone has influences. To claim originality while doing a remake is both inane and arrogant. But really, what frustrates me most is that he's being celebrated by an audience that apparently doesn't know or care what originality is. Anders barely acknowledges the new show's status as a remake; the article in question is even headlined, "The original Battlestar Galactica series bible..." To paraphrase Douglas Adams, this must be a definition of "original" with which I was previously unfamiliar.

In a New York Times article on rethinking "open source" culture, Jaron Lanier may have pegged the origin and continuing source of this level of cannibalism. “It’s as if culture froze just before it became digitally open, and all we can do now is mine the past like salvagers picking over a garbage dump."

The next logical step--praising salvagers as creators--has apparently begun as well. For a generation now coming of age, they literally have no concept of what constitutes "creation." Mash-ups, remakes and "re-imaginings" are all they get. And, if Moore can be praised for essentially claiming he built a house that he only repainted, they may never know the joy of encountering something truly original.

Well, except for Pixar.

Since I ranted here, feel free to rant back at me in the comments.

This is why I have a problem with fan fiction, movie remakes (I don't give a damn if the Coen Brothers make the remake or not), and mash-ups of any kind.

If I've seen it before, I'm not going to waste my time on a re-do, because someone doesn't have the imagination to come up with something new.

Open source is only part of the problem--the other part is people too lazy to come up with new ideas. They would much prefer taking the easier road of sucking off someone else's creativity.

I think it's one reason I've stopped watching TV and movies. Nothing interests me because it's all been done before and no one seems to be bright enough to come up with something new.

While I have not shunned TV entirely, and am still a movie fan, this rant on originality is dead on the money.

Perhaps a better word for Ron Moore would have been "rejuvenation" rather than "reinvention." Battlestar definitely turned heads in the mainstream for a bit, which doesn't seem to happen very often, if at all, on television.

I identify with your rant, Alex. I'm remaking your rant in my mind right now;)

That quote is just silly- how can it be original?

However, I like watching AI, esp the audtion shows, because it gives me heart while querying. All those people singing Lady Gaga out of tune...their writer counterparts are querying too. So maybe I have a better shot than it seems at times?

My hubby and I watched Hitchcock's The Man Who Knew Too Much recently, including the "making of" extras, and I thought it was so strange that he would have remade that film. But the studio wants what the studio gets. And I tried a mashup involving Lincoln and vampires and thought it was awful. Still made it on the NYT bs list, so what do I know?