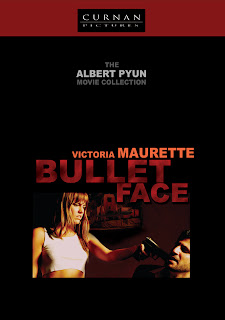 One of the first interviews I did for this blog was with cult director Albert Pyun about his upcoming film Road to Hell (you can read it here).

Now he's released Bulletface, part of the grand tradition of films created in a ridiculously short period of time, in this case five and a half days (twice as long as Corman's original Little Shop of Horrors, for a frame of reference). Written by Randall Fontana, it's a revenge tale of a corrupt DEA agent (Victoria Maurette) furloughed from a hellish Mexican prison to take down her old crew before they unleash a new, lethal street drug, and in the process avenge her brother's death. Low budget, digitally shot, it embraces its status rather than trying to deny it, and finds its power in its least likely places.

Dara Maren (Maurette), the "Bulletface" of the title after she's scarred, is a deceptively quiet creature, small and chain-smoking, perpetually greasy even when dressed up for a rave. You'd be quiet, too, if you'd endured what Dara has: gang rapes by both men and women in prison, brutal and bloody encounters that are definitely not titillating. Yet she retains her own brutality and willingness to kill, letting it out when provoked.

Maurette's performance is a gem of understatement in a role that could easily swing into parody, and that's the biggest surprise here: what works best are not the action scenes, but the quiet ones between Dara and the other characters. Maurette finds the reality in Dara's damaged psyche: her eyes dart, she fidgets, and the way she slaps away an intended tender touch has the vivid truth of an abuse victim.

The other actors contribute the same understated seriousness. Lydia Castro, as a heart-of-gold prostitute neighbor, finds a core of strength and depth in that cliche'd character. Morgan Weisser and Scott Paulin, as Dara's onetime friends, convey both real affection and the coldness of killers. Most interesting is Jenny Dare Paulin as Dara's former girlfriend; she and Maurette create a convincing edgy chemistry. Steven Bauer (Scarface, Thief of Hearts) is the name actor on hand, and he's adequate; it's easy to see how he'd feel unmotivated to try very hard, but as a result he's blown away by the other performers.

Fontana's script hits some disturbingly gratutious notes that Pyun's execution manages to almost redeem. For example, every woman who crosses Dara's path makes a play for her, a male-centric view of lesbian relationships, to say the least. Diminutive Dara also physically overpowers professional criminals double her size, often incapacitating them with one blow. But where Bulletface really suffers is in the editing: freeze-frames, color bleeds and split-screens take you out of the reality the actors and director create, and the constant bombardment of names and places, rather than clarifying things, just makes you feel the need to take notes.

If you can get past that, there's a lot that's good in Bulletface. This is exploitation, certainly, but it's made with care, heart and a serious effort to do good work. Pyun gets performances far above the call of duty from his cast, and Victoria Maurette takes fearless risks to bring Dara to twitchy life. 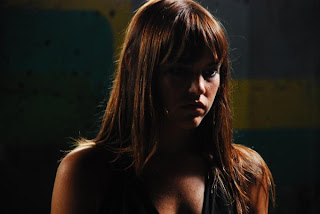