Okay, it isn't a person. It hasn't done anything historic, although it has made the news on occasion. But for me, the brown recluse spider (in Latin loxosceles reclusa) is one of the most influential residents of West Tennessee.

Except for one in the bug exhibit at the Nashville Zoo, I've never seen one alive. As the name implies, they're shy and nonaggressive. They're also tiny, as the picture below shows. They have a mark on their thorax in the shape of a violin, hence their other name: the fiddleback spider. 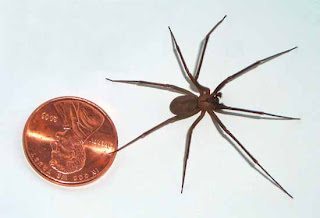 In 1983, I helped a friend clean out an old shed. It was summer in Tennessee, so I wore shorts. When I got home, I felt a burning ache in the back of my upper left leg, but I thought nothing about it. I couldn't see the actual spot, and I figured I'd just pulled a muscle. When my girlfriend saw it, though, she insisted I go immediately to the doctor.

I was able to get in to see my regular family physician, the one who'd treated me since childhood, and through a cloud of cigarette smoke he immediately pronounced it a spider bite. He said it would have to be lanced and drained, so I was told to lay on my stomach, in just my underwear, while the nurse--who I'd also known since I was a little kid--shot the area full of novocaine.

"Guess this is kind of embarrassing for you, too," I said.

"Oh, no, not at all," she said with professional cool. "It's much worse when it's closer to the rectum."

It took a week for whatever was in there to drain out; I had to walk with a cane, because the big muscle on the back of my leg couldn't really flex with a necrotic hole and plastic pipe stuck in it. A year later the same place flared back up, and I endured another week's discomfort ("discomfort" being the medical term; mine would be much pithier). And believe it or not, just two years ago (more than twenty years after the original bite) the scar tissue developed an abscess and had to be cut open and drained again.

This may be more about my upper thigh than you ever wanted to know, but if there's one thing about Wisconsin I wholeheartedly support, it's the absence of the brown recluse. At least black widows have the decency to be out in the open where you can see them.

About the black widows: Like their Reclusive neighbors, Black widows prefer low, dark places to build their webs. I once had one in my mailbox. Mailman never knew that I saved his life. :)

I heartily hate those things. In Oklahoma we had both and a friend of mydad went thru a brown recluse bite. Yuck yuck yuck.

I love Germanyfor the same reason! No spiders, no snakes!! Double win!!!