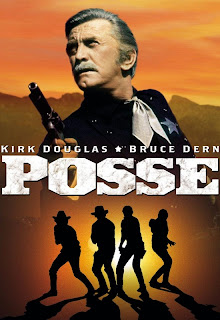 The 1975 western Posse poses a fascinating set of ethical and moral dilemmas. Released just after President Nixon's resignation, it speaks in the standard western vocabulary: tough marshal (Kirk Douglas), wily outlaw (Bruce Dern), a posse on the criminal's trail, shoot outs and train chases. But its purpose is to show the stained truth behind these pure symbols, both within the story and for the audiences of its time. Thirty-five years later, those truths are, if anything, more vivid.

Marshal Howard Nightingale (Douglas) wants to be a US Senator. He has the railroad's money backing him, and plans to use the capture of train robber Jack Strawhorn (Dern) as the stepping stone he needs. Nightingale has a highly trained posse, and eventually does capture Strawhorn after a mountain gunfight. He returns to a small Texas town for a public celebration of his bravery, prior to taking Strawhorn to the state capital for trial. But Strawhorn is more clever (and perceptive) than Nightingale realizes. 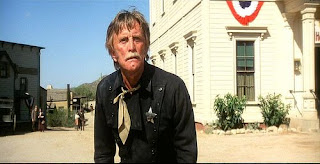 Throughout the scenes of Strawhorn's pursuit and capture the film is essentially standard fare for a western of its time. Even with its widescreen cinematography, it has the same high-key lighting used on Bonanza, Gunsmoke, The Big Valley and so forth. I could find nothing to corroborate this, but in retrospect it feels like a deliberate ploy to lull the audience into a sense of complacency.

And in a sense it does. Plot isn't the issue here, nor action, nor a showdown on main street. Rather it's the dissection of motivations that makes Posse so extraordinary. 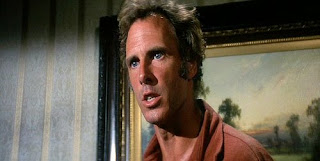 Nightingale's elite posse is fully aware they'll be out of work when he goes to Washington. Further, the posse use their uniforms and notoriety to take advantage of the locals, particularly the women. The newspaper editor is played by James Stacy, an actor who lost his left arm and leg in a motorcycle accident; with those injuries now attributed to the Civil War under the command of a similarly ambitious general, he sees through Nightingale's speeches and posturing. When he asks Nightingale flat out, "How will you vote if the interests of the railroad are different than those of the people?" Nightingale avoids giving a straight answer just like all politicians from Julius Caesar to Barack Obama.

Douglas, who also directed the film, hits just the right note as Nightingale. When he makes a speech, he sounds simultaneously sincere and somehow false, so that the reactions of both the hero-worshipping townsfolk and the skeptical newsman seem valid. But the real protagonist is Strawhorn, who proves himself the most perceptive and resourceful character in the film. Not only does he outsmart Nightingale, he proves his cynical world view to be the right one. I won't give away the ending, but it's brilliant in its minimal, absolutely right sarcasm.

As another reviewer pointed out, Posse has fallen through the critical cracks, which is a shame. Like classic revisionist westerns such as McCabe and Mrs. Miller, The Wild Bunch and Unforgiven, it uses the mythology of history to make a point about its own time. The sad fact that the films' "railroads" have become the "special interests" of today with no appreciable change in their self-interested influence (thanks, Supreme Court) means that Posse's central point is in no danger of losing its relevance.

What movies have surprised you with their contemporary relevance?

(Those with Netflix can watch a streaming version of the Posse.)