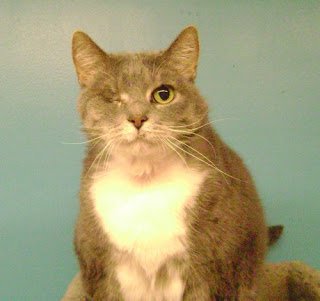 This summer I mentioned we got a cat. Apparently my prior comments on cats made this news surprising. So here's the scoop (and the litter box is over there! Badda-BING!).

I've gone on record many places as saying I hate cats. The last cat I lived with introduced herself by launching claws-first at my crotch (I was jingling change in my pocket at the time) and peeing on my leather jacket whenever possible. I adore dogs, want a dog, wish I had a dog. But instead I have a cat.

And the worst part is, I picked her.

We decided the boys needed a pet for the new house, so we went to the Shelter from the Storm adoption fair. I had every intention of taking home a dog, but clicked with none of the ones available. The cats, meanwhile, were displayed in a vast row along the outside wall of PetSmart, two and three cages high in places. Most had kittens or playful adolescent cats in them, and the cries of delighted children filled the air. Whoopee, I thought. As someone once said, "If you have a cat in your house, you also have a box of shit in your house."

And then, at one end, in a big cage all by herself, sat Lily.

She was fat. She was old. She had one eye. And no one was paying any attention to her. I saw a kindred spirit.

My family was so startled that I even wanted a cat that they gave me very little argument. We picked her up the same day we moved into the new house.

The decision has been eminently justified. She is sweet-tempered, quiet, affectionate and serene. She never lashes out at the kids for being too rough with her, even when the C-in-C poked her in her empty eye socket (yes, we took her to the vet, and no, there was no damage). She's still overweight, but we're working on that (having her litter box on the second floor helps). She's not a kitten, so I don't know how long she'll be around (her papers say she's seven years old), but she's settled into the family in a way I never expected.

I still hate cats, don't get me wrong. But every rule has an exception. 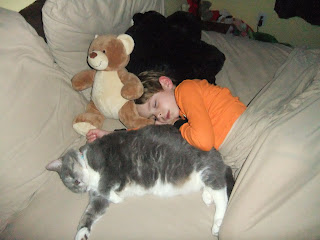 Lily sharing her bed with the Squirrel Boy. Oh, wait, it's the other way around....

Yarr, you got a pirate cat, matey! I love her, she's beautiful, and thanks for breaking your no-cat rule to give her a home.

And just FYI: the second floor litterbox has done nothing for feline obesity in my house, but good luck on that. ;-)

I am not much of a cat person and have 2... because according to the vet, the one I had was lonely! They don't like each other and I often wonder if they even like me. Maybe you can train her to use a treadmill? :D

She is gorgeous! And I love cats. The box of poop? Better than going out for a walk at 5 in the morning in sub-zero weather. And you can always scoop the poop.

I have a 3-legged cat who is the love of my life. I think the shelter kitties know how good they have it.

All you need is one good cat to change your mind. Congrats on yours! Let her be fat. She's fabulous!