At the Fiery Altar: the dragon cult of Burn Me Deadly

When I knew dragons -- or at least the belief in them -- would figure prominently in the second Eddie LaCrosse novel BURN ME DEADLY, I began to read as much as possible about their meaning in various societies, with an emphasis on those of Europe and the United Kingdom. The trope I wanted to examine was the classic (or cliche', as it may be) fire-breathing serpentine dragon, with wings and claws and an agenda such as hoarding gold or protecting a certain cave.

As I stated in an earlier post, my starting point was the dragon Vermithrax in the film Dragonslayer. That creature had it all: fire, wings, a physiognomy that could suspend disbelief and a ceremonial relationship that bordered on religion with nearby humans. But even with that as a template, I wanted to learn more, to make my folkloric dragons Lumina and Solarian into something substantial within their fictional frame of reference. After all, people worship and believe in them, so their mythology had to, bluntly, kick some ass.

I had a template in my own experience: southern Pentecostal snake handlers. They don't believe the snakes themselves are deities, but they certainly look on them as messengers of God's will. The belief that a pure heart will protect the faithful from a deadly creature works whether that creature is a rattlesnake or a dragon. 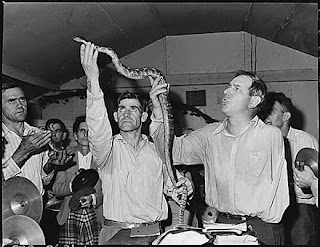 To create a comparable mythology for dragon worshippers, the indispensable book for me was British Dragons by Jacqueline Simpson. Written in 1980 (the second edition came out in 2001), it's a concise, eminently readable volume that deals with the origin of dragon stories in the UK and the concrete details that manifest when a society believes in dragons. 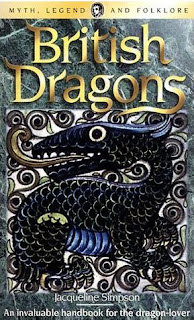 In it, I found an unexpected detail. In a majority of the dragon stories tied to specific locations and times (i.e., "this happened right here, fifty years ago") the stories end with the dragons being slain. So in addition to deifying the dragons, my worshippers would need a tale of a dragonslayer as well. That also had its origins in Christianity. St. George was the most famous dragonslayer, but hardly the only one; St. Columba supposedly faced down the dragon-like Loch Ness Monster.

As I studied tales of "dragonicide," one element I noticed was that the book's stories leaned heavily toward outsmarting and tricking the dragon, as opposed to the storybook image of the noble knight matching his strength against the dragon's. A dragon in Somerset, for example, is choked on a rock thrown down its throat prior to a roar. "More of More Hall" kills the Dragon of Whatley by kicking him with a spiked boot in his only vulnerable spot: his (as the book delicately phrases it) arsehole. And Sir John Lambton kills the Lambton Worm by studding his armor with spikes and letting the creature attack him. 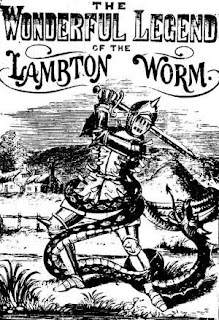 I asked Dr. Simpson, who has collaborated with Terry Pratchett and held various offices in England's Folklore Society, about this. She said, "I think that whether the dragon is killed in straight heroic combat, or by a saint's holy power, or by a clever trick, depends chiefly on the genre of literature or tradition in which the particular tale is preserved. Saints' lives and heroic epics or sagas are serious stuff, produced by and for the elite, and aim to impress; folk legends often aim not just to thrill but to amuse as well. Clever tricks by which the an apparently weak or inferior person outwits and destroys the strong are popular -- an old woman defeating the Devil, an cobbler or tailor defeating a giant. I would assume that both the heroic dragon-slayings and the tricky ones go back an equally long time, but that the heroic ones look older because they have been preserved in old sources such as Beowulf."

Still, I liked the idea of outsmarting the beast rather than overpowering it. So in my story, the dragon is killed by a variation of Sir John Lambton's tactics. It's a folktale, of course, and no one, especially my hero Eddie LaCrosse, believes it for a minute.

But you'll have to read the book to find out more.

BURN ME DEADLY comes out this fall.

I appreciate your background information.
Even I'm not a fan of dragons.

I love reading the research that goes into a novel. I think people often believe that fantasy writers don't have to do any research at all - they just "make things up."

Now I'm going to have to get my hands on some dragon folklore now.

By the way, as someone raised around primitive Baptists (I actually remember river baptisms), I was interested in your reference to the Southern Pentecostal snake handlers. Methinks if the primitive Baptists had had snakes, I might have hung around the church a little longer. ;-)

Thanks for all the great information!