You can't go home again (and really, who'd want to?)

Recently a family emergency required me to return to my tiny West Tennessee home town. How tiny? The population is roughly 300, and around 250 of them are related to me at some level.

Later, doing research for a novel set in the region, I came across this vintage (1970) description written by Donn (sic) Munson in SAGA magazine:

West Tennessee is a blue-bib-overall and bootleg-booze-from-a-Mason-jar country. On the surface, it's a land of cotton and hogs, soybeans and sorghum, grits and gravy. It's also a land of barn burnings and bushwhackings, where dogs are poisoned and anonymous phone calls threaten children's lives.

It's a land of neat churches and prohibition, a land where ramshackle motels have housed everything from moonshine to disease-riddled whores who cater to every known human desire.

There are parts of West Tennessee that make Port Said or Tijuana look like Disneyland.

When I think of home, this sort of thing comes to mind: 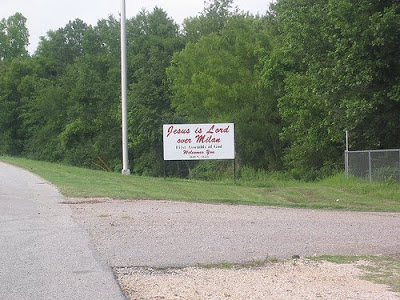 The irony here is that Milan (pronounced MY-lan, unlike the Italian city) is also home to the Milan Arsenal, making it one of the few places whose citizens could answer that rhetorical question of the far left, "Who Would Jesus Bomb?"

On the other hand, without west Tennessee (specifically dangerous, glorious, historic Memphis), I wouldn't have witnessed this moment: 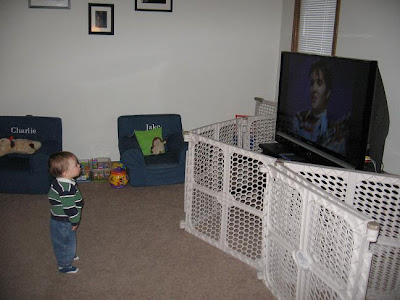 The C-in-C froze in his tracks and remained utterly immobile for a minute and twenty seconds, transfixed by Elvis singing "Teddy Bear."

I received the following from my mother, who still lives in west Tennessee:

Saint Peter was manning the Pearly Gates when forty people from Memphis showed up.

Never having seen anyone from Memphis at heaven's door, Saint Peter said he would have to check with God.

After hearing the news, God instructed him to admit them if they were virtuous.

"What?" asked God. "All of the Memphians are gone?"

OMG, C-in-C and Elvis! Together at last.
That is definitely the cutest thing I have seen in a long time.

LOL im from a small town in ga, now live in even smaller town in east tn)
i always threaten to move when i got 18 to big city, my mom always told me, now here at least if you have a flat tire, at least within 20 min, you probaly hae at least 5 cousins passing you, if u go to big city, you wont know anybody. that is sooooooo true. but i live in a smaller town in tn, and i dont know anybody hardly at all, thank god

(o im on the corner of tn/ga/sc line