There are many stories that would fascinate children, if told in a way they could understand. What little boy wouldn't love a story about a mad sea captain battling a monster whale, yet try reading Moby Dick to a child and see how fast their eyes glaze over.

Tania Zamorsky faced this reality when, as part of Sterling Publishing's "Classic Starts" series, she had to recreate Bram Stoker's Dracula to appeal to the series' target audience, beginning and "reluctant" readers.

Alex: How did you end up writing this version of Dracula? Had you read Stoker before beginning this assignment? What aspects of the original novel interested you the most?

Tania: I hadn't read the Stoker before. I had written two other books for the Classic Starts series - A Little Princess and King Arthur -- and my editor approached me -- this was back in 2005, I think -- to see if I was up for writing a third. She mentioned a few titles that were as yet unassigned, which included Little Lord Fauntleroy, Pollyanna, and, if I'm remembering it correctly, Rebecca of Sunnybrook Farm. Dracula was such an unexpected and seemingly out-of-place title on that list that I almost laughed -- but, immediately afterwards, knew it was the one I probably had to choose.

From the start, it felt like a bit of a risk -- or, at least, a rebellion of sorts. My earlier books definitely seemed "safer." And when I asked her what she thought, a close friend of mine with a young son confessed that she wasn't sure she wouldn't be comfortable buying the book for him.

But then I remember thinking about the Harry Potter series -- both the books and movies -- and the very intense and dark subject matter they contained. And I also believed, and still believe, that children naturally have a real – albeit simple -- sense of the tragic, of good and bad, of struggle, etc.. I thought, "What the heck, I'm going for it!"

I picked up and started reading the novel before officially claiming it as my title, and was immediately drawn in -- for starters, by the painting on the cover of my Penguin softcover edition (one of the three editions I ultimately consulted). 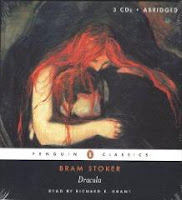 It is Edvard Munch's The Vampire - in fact, I just pulled it off the shelf and am looking at it again right now. It is of this woman, embracing -- seemingly comforting, but with her mouth at his neck -- a man, her wild red hair cascading down over them both. The picture is so sexy -- so crudely, almost blurrily, beautiful -- and in a way I guess the entire novel seemed that to me too.

Many aspects of the original interested me, not least of which were the dramatic transition s seemingly taking place at that time, e.g., between old and new, us and them, math and myth, as well as the roles of men and women.

Did you have in your mind an "ideal" reader as you wrote? How old was s/he?

If I did, it might be surprising to learn that that reader is not a child. She is someone real, an older family friend who speaks English quite well, but for whom it is not a first (or even second) language. She had never picked up Stoker's Dracula, and probably never would have attempted the story in that form, but read mine straight through, exclaiming (somewhat nerdily, and as she has for all my books), "That was the best book I ever read!" I'm not sure Sterling anticipated this audience -- aiming, rather, for the young or "reluctant" reader -- but this one person, anyway, is part of my audience.

It took some adjustments to hit upon exactly the right tone in my first book, but when I did hit upon the tone my editor was happy with, I kind of marked it in my mind -- it became something I could almost hear, like a musical note, which I would then try to match in all of my future Sterling projects. That's the closest I can come to describing my "process."

Ultimately, I think age appropriateness depends on so many things -- the child's intellectual and emotional maturity level, whether they are reading or being read to, etc. I think parents will pick up this book and quickly get a sense of its tone, and decide for themselves whether it will resonate with - or "sing" for - their child.

The original novel was done in an epistolary form, and your version changes that to a straightforward third-person narrative. Did you attempt to use the original structure, or did you know going in that you would change that aspect? What was the thought process behind that change?

I wrestled with adapting the epistolary form only very briefly, before deciding that would be too confusing for a younger reader. I felt the subject matter was already challenging enough.

I also thought the third-person narrative - the sort of "Once upon a time" set up -- might also create a bit more distance, making the subject matter seem safer and more soothing, more like a fairy tale than someone's actual reality you have just stumbled upon and are witnessing and could conceivably experience yourself.

Besides, almost selfishly, I thought the change would pose a really interesting challenge and writing assignment for me. I felt like I was creating something completely new.

How did you approach writing a story for children in which the central, title character is the villain and the hero role is filled by a group rather than a single individual?

I'm not sure I ever thought of the Count as a "villain," per se. He wasn't doing anything on purpose; he was just being exactly what he was -- very pure, true to his nature, like an animal. You can't be angry at an animal. And the character of Dracula, in spite of all of his obviously negative qualities, has always seemed sort of elegant and romantic to me. (I mean, think back even to that charismatic Count von Count from Sesame Street , on whom I will confess having a small childhood crush...)

As for the group aspect of the hero role - that's interesting, I never thought about that, but you're right: no one person really stands out. There is something nice about that, the way they all worked together as a team, combining their respective strengths and weaknesses to succeed in the end. Very "it take a village," I guess, to kill a vampire...

Even in this version, the story is fairly violent. How did you decide where to draw the line?

I hope this doesn't seem horrifyingly unscientific -- but, again, I just tried to aim for that certain aforementioned and previously established tone. Granted, it was harder to do with this book than with any of the others (I went on also to adapt Pinocchio and Peter Pan), but in the end I just crossed my fingers, and hoped that my aim would be true and my good intentions, obvious. I also trusted my editors and publisher implicitly.

Sterling is always very careful, when it comes to children's sensitivities, and asked me to extra careful here - in fact, listing so many things for me to be mindful of and tone down that I remember wondering to myself, in jest, whether I would be allowed to mention blood?!:) After I turned the manuscript in, they asked me to make a few more specific changes and cuts. For example, in the original novel, a mother comes to the castle accusing the Count of stealing her baby, which is also presumed to be the thing wiggling in the bag the three sisters are carrying. I left that detail in there but my editor thought this would be too upsetting, and so changed the baby to a dog. (Meanwhile, I remember thinking this might be even more upsetting, for some children anyway, but...)

Ultimately, however, I agree with you - it's still a violent story. I mean, there is simply no way, ultimately, to leave out the blood. But I hope that, whenever they are ready to read it, that whoever reads it -- as I did -- will see the beauty, as well as the blood (and will someday go on also to read the original).