Albert Pyun has been working steadily as a director since his 1982 debut, The Sword and the Sorcerer. He’s got over forty credits under his belt, and has worked with actors such as Dennis Hopper, Charlie Sheen, Burt Reynolds, Natasha Henstridge and Teri Hatcher. Now he’s putting the finishing touches to Road to Hell, a homage to one of my favorite films, Streets of Fire (see my reminiscence about Streets here). He was kind enough to speak to me about the project, and his memories of the original film.

Alex: We're both ginormous fans of Streets of Fire. Can you tell me about the first time you saw it? What's your favorite moment?

Albert: I first saw Streets of Fire at a Universal private screening before its release in 1984. I thought it was landmark cinema; it changed the language of film. I loved it from first frame, first note. My favorite moment was the telegraph scene and Cody arriving on an empty E train.

What was the reaction of the rest of this invited audience?

The screening reception was muted. I also saw the film when it opened and the theater was like a ghost town. Of course, I also went to the opening of The Rocky Horror Picture Show and there were six people in the audience. Both films found their audience eventually.

You've made a lot of films; what was the biggest challenge of Road to Hell?

Catastrophic loss of picture due to a defective hi-def camera. The flagship camera created a ghost that corrupted virtually every frame of the film. It continues to be challenging to correct every single shot. 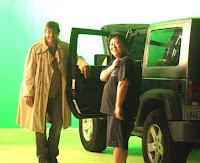 This is your first time working with Michael Pare'. He was quite a bit younger the first time he took on a role like this in Streets of Fire; how did you approach getting the same sort of iconic performance from him now?

Michael and I have known each other since the mid-90’s. We talked over the years about making a film together. In the back of my mind I wanted to put something together for characters like Cody and Eddie [Wilson, from Eddie and the Cruisers]. I picked Michael’s brains about who they were for him and what it was like back then. Our plans began to solidify when our paths crossed in Estepona, Spain where Michael received awards for Lifetime Achievement and Best Actor. In a series of meetings prior to shooting Road to Hell, discussions centering around who and what he was back then enabled Michael to feel the emotions and relive the thoughts from the 80’s. His performance in Road to Hell, you see him reflecting back on the past, not just his past characters but who he was at that time. His performance reflects a richness and depth because of all he has lived since then.

When I talked to screenwriter Cynthia Curnen (see interview here) she said you and she took the climax of Streets of Fire entirely differently: she saw it as tragic, while you found it romantic. She said that might simply be a difference in male and female outlooks. Do you agree? Have you changed your opinion on that since working with her on the screenplay?

Characters don’t need to get together for a romantic film; that’s basically the different between our two perspectives. The moments where he had flashbacks of her singing and when he took out her worn out picture from his wallet indicate that she was always with him. A guy like Cody would not have told her he would always be there for her if he didn’t mean it.

But I don’t believe he would always be with her, except as the ‘one who got away’. If he had stayed with her she would have wanted to go back to rock and roll. He had to let her go because he held an idealized version of her in his head that she could never live up to. The real Ellen was too shallow and sour; she couldn’t be bothered with the feelings of other people. She never thanked McCoy for saving her; she exploited Fish when she kissed him to hurt Cody. Cody was all about Ellen and Ellen was all about Ellen. He let her go so she could fulfill herself. Even when she said she’d leave it all for him, it was to get what she wanted then but she would eventually have thrown or driven him away. For someone like Ellen, the unavailable is more attractive than the available. Deborah Van Valkenburgh’s character wanted him to hook up with Ellen in so she could stabilize him. His sister chose Ellen for Cody to keep him off the Road to Hell.

No, I have not changed my opinion but Cynthia may have changed hers.

(Note from Cynthia Curnan: I agree with Albert’s take on the characters and their motives. I would call it a romantic tragedy, but it’s still tragic through and through. I see that Cody’s idea of Ellen kept him believing in the possibility for redemption. From Carl Jung’s perspective Cody needed to keep Ellen in his psyche in an attempt to be a whole person. She provided the ‘anima’ in his unconscious necessary to maintain a measure of self-control.)

Thanks again to Albert Pyun and Cynthia Curnan for talking to me about Road to Hell. The film is in post-production and the release date is still pending.

GREAT interview! I can't wait to see the movie.