As someone whose vampire novel will be published in the spring (Blood Groove, from Tor Books, will be released March 31, 2009), I'm fully aware that the gold standard, the top of the heap, the absolute pinnacle of vampire literature remains Bram Stoker's 1897 novel Dracula. Without it, the vampire as a popular figure would have a very different image, or might not exist at all, remaining a marginilized, personality-lacking boogeyman like the ghoul or the zombie.

Stoker's novel has never been accurately translated to the screen (although the 1977 BBC production with Louis Jourdan comes closest), so to this day actually reading the novel reveals a far different story than one might expect. Here are five of my favorite little-known trivia facts about Dracula, the novel:

1) Lucy Westenra's three suitors -- Dr. Seward, Quincey Morris and Arthur Holmwood -- are friends when the book begins, and remain friends even after Lucy has chosen one of them (Arthur). There is literally no tension in the trio; the two losers are genuinely happy for their friend who won her hand. This kind of subtlety is so unusual it's been almost completely ignored in film versions (the exception being the ghastly Coppola film).

2) Dracula first appears as an old man and then grows younger as he acquires new blood. The Coppola film makes an attempt at this (Gary Oldman's bizarre blowdried-ass hairdo is at least snowy white)... 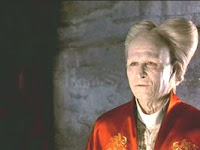 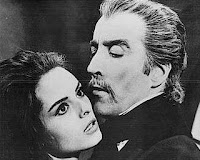 But for the most part Dracula is depicted as unchanging, an idea that has become ingrained in the current eternally-young vampires of Twilight. Yet Stoker meant to show that Dracula had exhausted not just the blood, but the very will to live of the peasant community around his castle, and that's why he relocates to London.

3) Dracula has three "wives" at his castle, but he does not bring them to London. No reason is given for this. When the vampire hunters chase Dracula back to his castle, the wives are still there, and Van Helsing dispatches them. 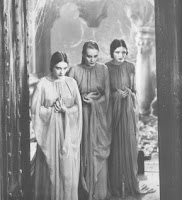 The best explanation I've seen for this was in a play version produced in Nashville, TN six or seven years ago. Using only staging and vocal inflection, the production made it clear that one big reason Dracula was leaving was to get away from these nagging, needy, unpleasant women he'd unwisely granted eternal life. It was an unexpectedly funny display, and the highlight of an otherwise weak production.

4) The word nosferatu is not genuine. Stoker cribbed it from another book, an under-researched travelogue called The Land Beyond the Forest by Emily Gerard. Before that, it appears in no known language, let alone Romanian.

5) Dracula is killed, not by the scientist/physician/vampire slayer Van Helsing, but by an American cowboy (Quincey Morris) and an English law clerk (Jonathan Harker).