Solving the Murder at the Cheatin' Heart Motel

Longtime readers of this blog will know I have a somewhat unresolved relationship with my home region of West Tennessee. It's not the most scenic area: the state of Tennessee slopes downhill from Appalachia in the east, so the western end is the lowest, muddiest and flattest part. Except for Memphis, there are no notable cities (I suppose you could count Jackson, but it's always felt like a city consumed by its own worst interests). And the people? Well, let's just say that when I lived there, they thought nothing of beating up a kid for reading a book. Because reading was weird.

So the last thing I expected to do was to find that this dull area had inspired hard-boiled genre literature. But damned if it didn't. 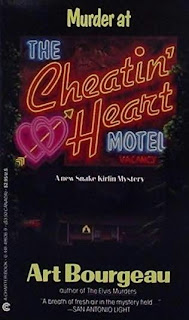 I ran across Art Bourgeau's Murder at the Cheatin' Heart Motel in the late Eighties, when I lived in Huntsville, AL. It was written in 1985, and concerned Claude "Snake" Kirlin, a freelance reporter for Ultra Suave magazine, and his buddy F.T. Zervich, trying to solve the murder of Snake's aunt, proprietor of the titular motel. The establishment is located on Chocktaw Lake, which Bourgeau describes thus:

"Anyway, in the winter of 1811 three earthquakes hit right where you're sitting. Each one was several times worse than the famous San Francisco earthquake. It was so bad that a land area of about a hundred miles simply fell into the earth. The banks of the Mississippi broke down, and the water rushed in to fill it. That's how Chocktaw Lake was formed."
(p. 13)

Wow, I thought. That sounds familiar. It sounds, in fact, like Reelfoot Lake. According to this entry on the ever-reliable Wikipedia:

"Popular history says that the lake was formed when the region subsided after the New Madrid earthquakes of 1811–1812, and that the Mississippi River flowed backward for 10–24 hours to fill it."

Someone wrote a mystery set on a fictionalized version of Reelfoot Lake, a place I'd gone fishing and on picnics and visited my whole life! It was, for me, a world-shifting realization. And it got better.

Bougreau introduced the book's villain, Sheriff Casper Denny, with this:

"I'd heard of him before. Everyone had heard of him. He was a genuine, bona fide legend. A twentieth-century Wyatt Earp who had single-handedly taken on the west Tennessee mob, a group whose roots went all the way back to Jean Boquin. They had tried to move into his county, and in the process, the sheriff had been shot, had his house bombed, and his wife and son had been killed."
(pp. 17-18)

Recently I spoke to Art Bourgeau about his book, and to my surprise he said, "The sheriff character wasn't modeled on Buford Pusser. Sheriff Pusser was a heroic figure, my character wasn't. The two things that could make you think it was Sheriff Pusser was his haircut and him fighting the mob. I used the Glen Campbell haircut which he and many other sheriffs of the time wore as a metaphor to show he was a very uptight, stressed-out, anal type of person. The job didn't make my character this way, it was his nature. You can tell a lot about a man by his haircut...As to the nastiness of the personality of Sheriff Casper Denny, that was not a reflection on Sheriff Pusser. Quite the contrary, I never met the man. As far as I know, he was a saint. The character of Sheriff Casper Denny was an extension of my own life. My father was a Tennessee Deputy Sheriff and he was a shit." 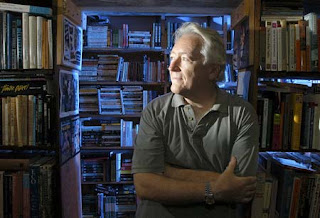 So for twenty years, I'd had that wrong. But by the time I found out, I'd learned to look at the world of my youth with a writer's detachment instead of a ex-pat's ambivalence. Hints of that world have shown up throughout my work, and will probably always do so.

And at least I was right about Reelfoot Lake. Bourgeau told me, "The idea of the lake comes from reading about Reelfoot Lake and thinking it must be one of the neatest places on earth, but I've never seen it. However, I have seen the bayou of Louisiana and the wetlands of New Jersey, so I am familiar with how it might look. Still, it is darn fascinating. The New Madrid Fault and all that. It is larger than history. It belongs in fantasy."