NOTE: This is the latest in an ongoing occasional series about notable figures from my home region. These are personal reminiscences and opinions; where available, I'll include links so interested readers can find out more.

"My name is spelled with two e's, two f's and another e, and nobody ever spells it right."

If you're of my generation, you remember Bo Derek as the epitome of beauty, codified and made official by the movie 10. But if you're a genre fan of my generation, you also remember her next film, a project so godawful it still provokes open-mouthed amazement. 1981's Tarzan, the Ape Man borrowed its title from Johnny Weissmuller's debut film but everything else came from some bizarre other dimension. Directed by Bo's husband John Derek, it featured Bo as Jane, an unrestrained Richard Harris as her egomaniacal father, and as Tarzan, newcomer Miles O'Keeffe.

That would be the former Miles Keefe of Ripley, TN. 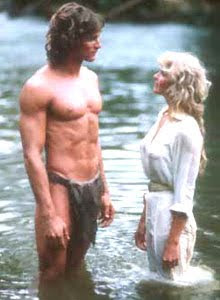 Genre fans also know Miles from a pair of roles later in the 80s. In Sword of the Valiant, he played Sir Gawain to Sean Connery's Green Knight. Sporting a blond pageboy wig, Miles shows us things you never knew you wanted to know, like how to use a can opener to urinate while wearing armor. 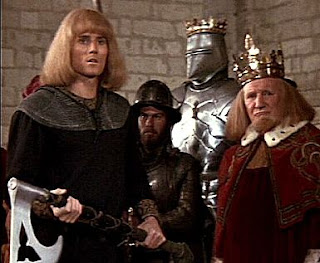 In the Italian film Ator, the Fighting Eagle, he's a fantasy swordsman battling evil, but it's the sequel, known in some places as Cave Dwellers, that really keeps him on the map. This film, riffed by Mystery Science Theater 3000, is available in the Volume 2 set. And on page 37 of The Mystery Science Theater 3000 Amazing Colossal Episode Guide, actor/writer Mike Nelson pens a tribute to his vision of Miles. 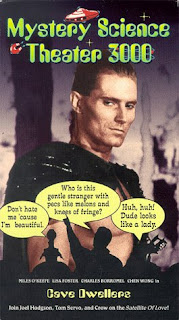 I've never met Miles, but he comes across as a solid actor whose basic dignity survives even the worst of his films. My buddy Hays Davis (fans might spot him as the person to whom Burn Me Deadly is dedicated) grew up in Ripley and provides this Miles-related anecdote:

"My friend Kathy went to the senior prom with Miles, and they graduated together from Ripley High School in 1972. I remember seeing Miles play the lead role in that year's senior play, Li'l Abner. After graduation they went their separate ways. Years later, in 1978, Miles went to a party at Kathy's house. He had missed out on an opportunity to try out for a Chicago rugby team, and wanted to try out in San Francisco. Their friend Billy made plans with Miles to drive there, and before the night was over Kathy had signed on as well. The three drove to San Fran in a Pinto, which was a real feat, as Miles was a big fellow. Miles stayed out west, and not long after, while at work one day, Miles was spotted by some industry folks who sized him up for the Tarzan role.

"I remember going with friends a time or two to the Keefes' house in Ripley. Their daughter Kelly was three years older than me, and their brother Coleman was another couple of years older, and all nice folks. While I knew them as the Keefes, the name O'Keeffe was the original family name, which had been revised years back. By the time Tarzan was released, Miles had reverted to O'Keeffe, along with at least some of the rest of the family, if I remember correctly."

I'm not sure if Miles is still acting; his IMDB credits stop in 2005, although he's listed as the star of the 2010 short film King of the Road. But like Mike Nelson, I am sure about one thing.

The man could beat me up. 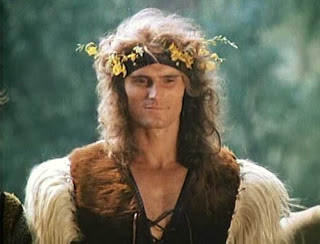 I've got a VHS of MST3K's version of Cave Dwellers (a.k.a. The Blade Master, a.k.a Ator the Invincible 2) for one lucky commenter.

sigh. he has a great body even if the blonde wig looked stupid.