Interview: Kim Newman, author of The Man from the Diogenes Club

Like my novel Blood Groove, Kim Newman's hysterically funny, thrilling and affecting short story collection, The Man from the Diogenes Club, is set in the Seventies. In Newman's case it's England in the early part of the decade, where the titular club (originated by Arthur Conan Doyle) is now the headquarters of an organization that battles supernatural and out-of-the-ordinary crimes. The agent at the center of the stories is Richard Jeperson, a gaudy clotheshorse and brilliant investigator who appreciates the absurdities around him, much as Newman does in the situations he contrives. 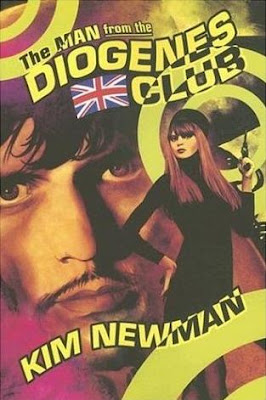 Newman, also a noted film critic and author of the classic vampire novel Anno Dracula, was kind enough to answer some questions about recreating such an oft-despised era. 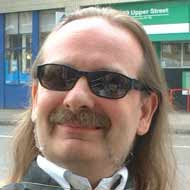 Alex: Why did you pick the 70s for Jeperson's adventures?

Kim: It wasn’t quite that way round – I needed a 1970s character for this long piece (Seven Stars), and picked one I created in the early ‘70s in my first attempts at fiction. Of course, first time round, he wasn’t a ‘70s’ character but a contemporary one - that aspect became important in recreating him, his supporting cast and the world. I was a teenager in the ‘70s, remember it well and had a lot of formative experiences then. When I wrote the first few Jeperson stories (‘The End of the Pier Show’ was first), the ‘70s wasn’t particularly often used in genre fiction as a period setting; since then, it’s become more common, though not always in the ways I’ve highlighted.

You get a lot of great mileage out of Jeperson's fashion sense. How did you decide on his outfits?

A combination of memory, research and imagination. I admit that in the 1969-set story I’m writing at the moment, I dressed the heroine in the outfit that Linda Thorson is wearing in the March page of the Avengers calendar that hangs over my desk. This aspect of the stories has become a lot easier with broadband internet (also useful for things like period cars) to help with the research.

You imply that a lot of today's issues had their origins in the 70s, when many contemporary movers and shakers were young. Was this a dramatic device, or do you truly see that era's narcissism as the prelude to today's cutthroat culture?

That’s exactly the point of the stories – beyond generally having fun. I wanted to look at the origins or analogues of modern ills (I’ve done that in 19th Century-set stories too) in the past. I also think the contemporary reader needs a hook beyond nostalgia to get much out of the stories.

Was there any aspect of the time period you wanted to incorporate, but couldn't manage to work into a story for this collection?

Not really. I’m wary of doing too many stories in this series (though, as I said, I’m writing one now – about the moon landings), and have hung some of them on things that were features of the 1970s or types of stories common in the late ‘60s and ‘70s. I’ve a vague sense that I ought to do a blaxploitation or kung fu story (I’ve not done one set in America, even), but think that a white British guy writing Harlem dialogue might come across very poorly.

I've had some criticism for writing black characters in my vampire novel who spoke the way I remember (I was a teenager in the 70s as well, in the American South where I set my novel). Do you think that's a legitimate position? Or is it a line that will always cause offense if it's crossed? And is the risk of causing offense reason enough to avoid the topic?

I think you're on firmer ground writing from experience. In my case, I'd be drawing on having seen a lot of Pam Grier movies or - if I worked hard - reading Chester Himes novels rather than real life. I'm not saying I wouldn't do it - I've also not thought up a proper blaxploitation story worth doing in the series - but I would feel obliged to take a bit more care. I'm certainly willing to offend people, and can't really avoid it given the kind of material I like - but I'm also all too well aware that it's very easy to come off sounding silly.

Thanks to Kim for taking the time to talk to me. Watch for another Diogenes Club collection from MonkeyBrain Press next year, as well as a hugely revised edition of his non-fiction book Nightmare Movies from Bloomsbury.