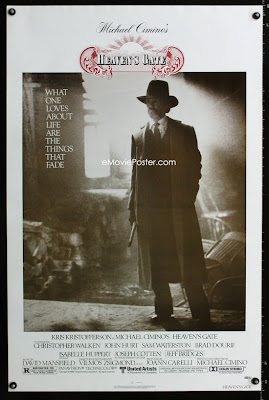 I recently rewatched Michael Cimino's 1980 film Heaven's Gate. Yep, the notorious disaster that destroyed a studio and the career of its director. For background, check out the late Steven Bach's book Final Cut.

A quick synopsis: Harvard graduate Jim Averill (Kris Kristofferson) goes west and becomes marshal of Johnson County, Wyoming, a place settled mostly by Eastern European immigrants. When these immigrants start killing cattle to feed their starving families, the cattle barons, with the approval of the governor and president, hire an army of killers to eliminate them. The immigrants, though, fight back. And just as they're about to overcome the assassins, the cavalry rides to the rescue--to save the bad guys.

In a coda we see an older Averill back east, having returned to his world of wealth and privilege but still wrestling with his conscience.

I was struck by the pessimism and cynicism at the heart of the story, and its parallels--emotionally more than narratively--with the America of today. Like the immigrants in the movie, most of us feel powerless to resist the economic and political forces arrayed against us. We know that rare good men like Jim Averill can't protect us from the sheer epic badness of the world's powerful people. Like the bankers, lawmakers and lawyers behind our current economic disaster, the film's immigrants face the rich cattle barons, Wyoming's governor and even the president (Benjamin Harrison, a Republican). These forces are untouchable, protected by wealth and distance and entitlement. "It's not me doing this to you," the Army captain tells Averill as the villains are saved, "it's the rules." Homeowners being evicted might get the same speech.

And like those immigrants in the story, our fear and frustration often come out in violence directed at the people we feel are responsible for our misery. In our case, this often turns tragically to former bosses, co-workers and family, because those truly responsible are too well protected (witness the private security employed by AIG executives to greet protesters at their palatial homes).

Averill starts with high ideals that are subsequently destroyed; the end of the film finds him on a yacht off the coast of Rhode Island, clearly wracked with guilt and regret but also as clearly not leaving this safe socioeconomic cocoon. It's the nineteenth century version of the golden parachute.

None of this excuses the excesses of Heaven's Gate, both financially and artistically. But it does reinforce the idea that sometimes things made with sincerity (and no one questions that Cimino really was trying to, and thought he had, wrought a meaningful film) can resonate far beyond their time. And truthfully I'd rather watch Heaven's Gate than an empty, entirely pointless "success" like Transformers any day.

Note: the documentary Final Cut, narrated by Willem Dafoe, can be found on YouTube here.

I agree. I'll have to check that movie out. I like the ones that really make you think, esp. the ones with echoes of today.