Sometime in the early 80s, I was prowling the 99-cent cassette bin at Old Hickory Mall (the only one) in Jackson, TN. These were always crap shoots: aside from the total unknowns, many tapes by known artists had no songs you'd ever heard of. This time, though, in the midst of the tightly-packed rows of rectangular plastic spines, I spotted a familiar title: Streets of Fire.

As a diehard Bruce Springsteen fan, I recognized this as the title of a song from his 1978 album Darkness on the Edge of Town. I did not know the tape's artist, though: Duncan Browne. Still, if he covered a song by the Boss, he might be worth checking out. For a dollar, it was certainly worth the risk.

Alas, it wasn't the Springsteen song. "Streets of Fire" was a seven-minute instrumental at the end of side one. But by the time I got to it, I already realized the music gods had smiled on me. Duncan Browne had a full-blown, distinctive style in 1979 that sounded awfully close to the one Dire Straits used five years later on their huge Brothers in Arms album. I'm not saying Mark Knopfler ripped off Browne: Knopfler's tunes were much jauntier and lighter. I do think Browne was ahead of his time in placing loose, jazz-flavored guitar work in a pop setting. And since his music reeked of dark, wet streets and moody clubs behind unmarked doors, it failed in a market where "Walk of Life" and "Money for Nothing" later became huge hits.

The album kicks off with "Fauvette," a song about a "street-level Joan" (as in "of Arc," I've always presumed) who is a "Fauvette," apparently a French word for nightingale. The tune is moody, and Browne sings with a simple, dark conversational voice. But his guitar-playing is phenomenally spare and gripping. I'm no musician, so I have no idea if it's technically difficult, but it draws you in as much with the spaces between the licks as the notes themselves. I was hooked by the end of the first chorus.

The next track, "American Heartbeat," is more conventional. (An aside: For probably twenty years, I had the misfortune of owning cars with unreliable cassette decks. This meant that usually I had only one working speaker channel at any given time. On most songs it didn't matter, but sometimes it presented little gems I would've otherwise missed. On this song, after the line "Outside a streetcar named Desire it's a one-way flight," you could hear Browne laugh at himself, as if shaking his head at this lyric. That's lost completely in the full stereo mix.)

I won't bore you with a track-by-track synopsis. Instead, go and buy the MP3 download here. You wont be disappointed.

Of course, it's not as cool as having a copy of the original vinyl album still in its shrink wrap. 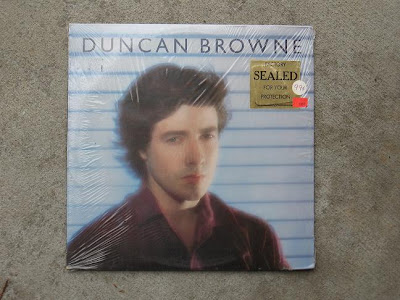 When I began writing Blood Groove, I had a central idea (old world vampire takes younger American ones under his cape), a hero I'd created for a previous short story and a vague plot concept about the danger these vampires would face. What I needed was an atmosphere, a vibe, to slide into while I wrote. It's an intangible thing, to be sure, but it's crucial to the process, or at least to my process. For The Sword-Edged Blonde, it was the Fleetwood Mac song "Rhiannon." For Blood Groove, it was side 1 of this album. That's why I named my heroine Fauvette, and why the book is dedicated to the memory of Duncan Browne, who left us in 1993.

I don't know how he'd feel about inspiring a vampire novel. I hope he'd be tickled that his music helped someone else create something. I know that I can't imagine this book, these characters, without his music accompanying them.

Nice tribute Alex. I also have albums I listen to while I'm writing or visualizing a scene. :) ~Lisa